Disney brings you a new story from the world of Wreck-It Ralph. 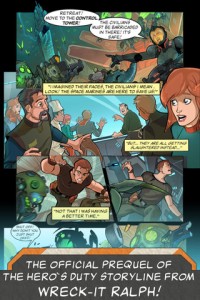 Wreck-It Ralph is a great movie for kids, but when kids love something, it’s hard to leave it all behind at the theater. Now, you don’t have to, with great Wreck-It Ralph apps that will engage your kids and foster a love of reading at the same time. The Hero’s Duty Interactive Comic is exactly what it sounds like: a comic book that plays out on your iOs device, giving kids a glimpse of how the world of Hero’s Duty came to be.

For those not familiar with the story, Hero’s Duty is a video game on Wreck-It Ralph that Ralph visit to earn the medal he covets. It’s an obvious nod towards Call of Duty, but presented in a much more kid friendly way. The soldiers in the game are fighting laboratory bugs that have overtaken their creators and overrun the world. Rather than making the comic book a direct part of the story from the movie, the Hero’s Duty Interactive Comic is more of a prequel.  While Wreck-It Ralph himself does not make an appearance in the comic book, kids will be delighted to see some other familiar characters in a totally new story. 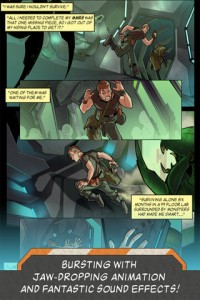 The Hero’s Duty Interactive Comic plays out like reading a comic book. Kids swipe the screen to see one panel at a time. The panels do not advance on their own, so kids can take as much time as they want to read the text and look at the pictures, while dramatic music plays in the background. Once all the panels in a page have been displayed, the app gives the readers a look at them all on a page together before advancing to the next panel.

There is not a narrator, os this is an app for either older kids who are already proficient readers, or for parents and kids to enjoy together. The interaction mentioned in the title is more the fact that kids can read and tap on the pages than any sort of gameplay involved. Hero’s Duty Interactive Comic is a comic book, not a game, and it’s a great way to get kids reading. Even kids who are difficult to convince to get off the screen and into a page will enjoy the sounds and feel on an interactive comic. 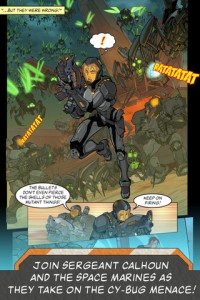 Final Thoughts:
The Hero’s Duty Interactive Comic is a great way to get kids excited about reading, with a bonus of having some of their favorite characters in a brand new story line. While the themes of fighting and soldiers definitely target older Wreck-It Ralph fans, it’s a quick read that offers an interactive interface that will have even the most fanatic gamers willing to put down the controller and pick up a (virtual) book, at least for a while.