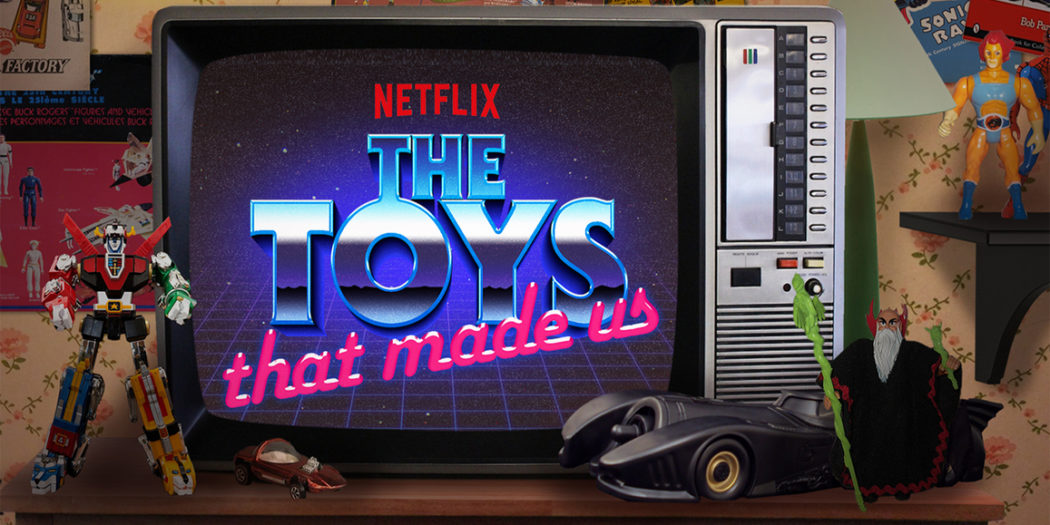 Home / Interview / The Toys That Made Us: Interview With Brian-Volk Weiss

Can you please tell me a little bit about yourself and what inspired you to create television shows?

Brian-Volk Weiss: I was born and raised in New York City, I went to college in Iowa, I’ve lived in LA for 21 years, I’m married with three children, I’ve always loved toys and playing with them, and when I was in college I started collecting them, and when you’re a TV producer it’s probably a good idea to try and sell shows on a topic that you’re passionate about. And I’m very passionate about toys and then I tried selling it [an idea for a show] for seven to eight years, and thank god the Netflix corporation green-lit it at the end of 2016.

The Toys That Made Us is one of the most fun shows that I’ve watched! And I was captivated by it. As kids why do you think we were so drawn to these toys?

Brian-Volk Weiss: I think the reason that the show is successful and the reason why toys are beloved— it’s not so much about the toy as it is about who the person is, and how old they are, who they are, and what they are when they’re playing with the toy. You know for me— I have heard this from hundreds of people, Optimus Prime was a father figure. And it’s really funny! I hear all the time that Optimus Prime was a father figure to them, and I’m always like: “Was your father gone? Was he dead? Did you hate your dad?” and nine times out of ten people were like: “NO! I love my dad!” So that’s what Optimus Prime was to those people.

My good friend Marisol told me that she wanted to become an executive because of the Executive Barbie doll. She always thought: Barbie had the car, Barbie had the house. So the thing with Optimus Prime of him being like a father figure― I don’t know if Barbie was a mother figure but certainly an inspiration and it impacts how you bond with these iconic names and brands, and why you’re still talking about them 30-40 years later.

Absolutely! As a 30-year-old woman myself, I grew up loving Power Rangers, which of course drove my mom a little crazy because she saw me as a little girl that should like little girl things such as Barbie. Well, I didn’t really like Barbie. I wanted to be a Power Ranger instead! [Laughs]

Brian-Volk Weiss: [Laughs] I believe it! And it’s funny because I think if Power Rangers had come out five years earlier it would’ve been five dudes to the one girl, you know like Star Wars it was just Princess Leia for two movies and then there’s three movies and two girls, and now it’s fifty-fifty male/ female. I think Power Rangers— and a lot of people don’t give it credit for this and a lot of credit goes to Margaret Loesch who was running Fox Kids at the time [1990-1997], and that was the beginning I think of that change or at least a part of the beginning of that change.

How do you decide which toys get featured on The Toys That Made Us? Is the decision made by generation or impact?

Brian-Volk Weiss: I’ve got three quote-on-quote rules that I use. The first is I imagine a Mount Rushmore of toys, and there has to be at least one character from a line that could be on a Mount Rushmore of toys. So my wife, for example, doesn’t know anything about Transformers but she knows what Optimus Prime looks like, she knows what Bumblebee looks like so they have to have an iconic character— at least one.

The second thing is I really want at least two generations if not three or four so like Barbie, Star Wars, and G.I. Joe is perfect. In some rare cases four generations but in many cases three generations, so if it relates to a TV show that is not cheap to make you want to get as many viewers as possible. You basically want constituency for each episode, so like Star Wars and Barbie applies to 40 to 50 years of existence, so you really want a multi-generational line.

And then third there HAS to be a good story! There are some very exceptional toys where there’s no story— basically, somebody had an idea, somebody green-lit the idea, they put the toy out it was a huge hit and that was it. There’s no ups and downs, left or right or twists so there has to be a good story to tell. That’s really the three rules.

Out of all the toy lines featured across the three seasons of The Toys That Made Us which is your favourite and why?

Brian-Volk Weiss: The whole reason I’m even in show business is because of Star Wars. So technically Star Wars is my favourite episode but ANYTHING Star Wars is my favourite so the fact that we were able to re-create IOM, the people I got to meet, I mean it was just insane. So technically it’s Star Wars but I REALLY like the Star Trek episode, the My Little Pony episode, I’m very proud of the Barbie episode, obviously, I’m proud of the He-Man episode even though Teenage Mutant Ninja Turtles is said to be the best episode.

There’s one episode I won’t say which it is that I wish I had another week to work on, but except for that episode, I’m happy with how all the other episodes came out.

What were some of the challenges you faced as you created The Toys That Made Us?

Brian-Volk Weiss: You know it was very challenging to sell but it was to be completely honest with you not very challenging to make. It was very weird I don’t understand why it was so hard to sell. It seemed like such a no-brainer to me for all the reasons I just described: here’s the product that’s been popular for 40 years or more, nobody knows anything about where it came from, like why would that be so hard to sell? I don’t know why. It’s still a thing I don’t completely understand and I came close to selling it twice, and then at the last minute, it didn’t happen for silly reasons.

People didn’t understand how important toys were which is so strange, like if you look at how much money Mattel and Hasbro make it was just very strange to me. It was very hard to sell. It took about seven to eight years to sell but once we got green-lit it really was not hard at all to make if I’m being honest.

As you created the show was there something specific that you learned along the way that you didn’t know before?

Brian-Volk Weiss: I mean the main thing that I learned and I kind of had this “vibe” before the show got green-lit, was making the show— I got a lot of the details and particulars that proved my theory much more strongly than I realized or expected which was: failure in the toy business is SO easy and success is SO hard. For every He-man which arguably was a very short-lived success, for every Star Wars, for every Barbie, for every Hello Kitty there are probably HUNDREDS of failures. I mean maybe a thousand failures per success. So that was the main thing I learned that I thought was extremely interesting.

You know when you’re a kid you just take it for granted: YAY He-Man! Of course, it’s popular. When you’re older and certainly when you’re producing a show all about toys, you realize: Ohhhh A, B, C, D, E, and F failed for G to have a chance.

And I think too as a kid we don’t know what goes into creating these toys right? Because we just see these toys and go: Oh! It’s so cool! We want it! So it’s just a mind-blowing show that you’ve created. Even I had no idea of what goes on behind-the-scenes of creating these toys for us to collect, and if taken care of very well these toys can last for many generations.

Brian-Volk Weiss: Exactly! You are 100 percent right and I bumped into Jim Swearingen a couple of months ago— the guy who convinced Kenner to make the Star Wars toy line was almost on the verge of tears thanking me and the show for changing his life. It’s very interesting that someone like him who changed my life and millions and millions of people my age no one knew who he was except for a tiny group of toy geeks until the end of 2017.

Since you are a fan of Star Wars who is your favorite character?

Brian-Volk Weiss: My favorite character is Return of the Jedi Luke! I’ve always liked Luke and it was in the Return Of The Jedi where I fell in love with Luke, but a very similar character in many ways who is anything now at this point in my life is as much if not a BIGGER character for me is Ahsoka Tano who was introduced at the beginning of the Clone Wars. And she has a very similar story with Luke and one of the reasons why I’m attracted to both characters is they are having a MASSIVE internal struggle between staying on the good and the bad side of the force.

The Toys That Made Us is a show that shouldn’t be missed!

Tags Brian Volk-Weiss Interview Toys that Made Us

Hey! I'm Nadia! I am a big fan of RPGs and you can almost always catch me playing one in my spare time. Writing is my passion, and my intention is that you all learn something through my work!
Previous January’s PS+ games include a Drake and a goat
Next Coming Up: The games of January 2019