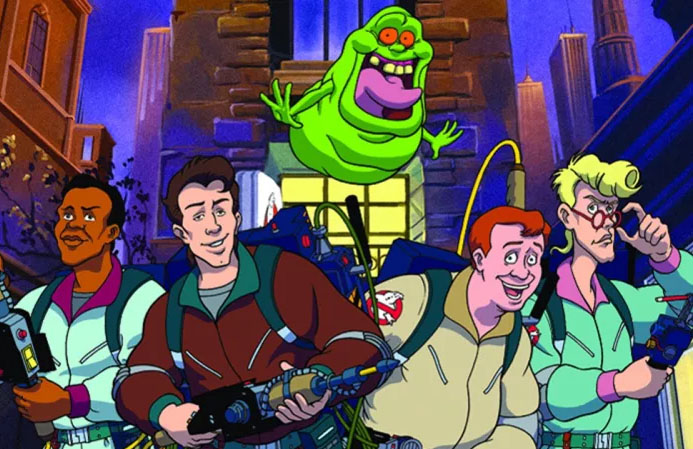 Happy Ghostbusters day! To celebrate the “holiday” DST has announced that their hotly anticipated Real Ghostbusters figures finally have a launch date.

Not that it’s all that relevant of a fact though, since nobody really remembers the team with the ape and the talking car. Fans are pretty much all about Peter, Ray, Winston, and Egon. And to that end, we have a very cool announcement today from Diamond Select Toys, as to the release window for their action figures based on that cartoon series.

Officially a part of their GB Select lineup, The Real Ghostbusters were shown off for the first time this past Toy Fair. In addition to being awesome all by themselves, the figures come packed with parts to assemble the front of the firehouse, as seen in GBII. Though you’ll need the rest of the figures in the sequel-centric waves to finish it.

Series 9 is the one that you want to keep an eye out for though, if you’re a fan of the cartoon. That’ll officially kick off the animated run. Winston, Egon, and Slimer will make up the wave, set to arrive late this year. Hot on its heels will be series 10. That will include Ray, Peter, and DST’s first every fully-articulated Stay Puft Marshmallow Man. Pre-orders for these will be posting soon to your favorite stores.

If you are looking to build that Firehouse by the way, then you’ll probably want to know when the rest of these will be out. Remember, you need all the figures from the new waves to do that. You can actually get waves 6 and 7 right now, as they’re all available. Wave 8 will be shipping “imminently” as well, so watch for that.

Lots to like, and plenty to drain the wallet on, if you’re a GB superfan.

Jason's been knee deep in videogames since he was but a lad. Cutting his teeth on the pixely glory that was the Atari 2600, he's been hack'n'slashing and shoot'em'uping ever since. Mainly an FPS and action guy, Jason enjoys the occasional well crafted title from every genre.
@jason_tas
Previous Crackdown 3 delayed into 2019 for both Xbox One and PC
Next Titan Quest dated, questing onto Nintendo Switch this July