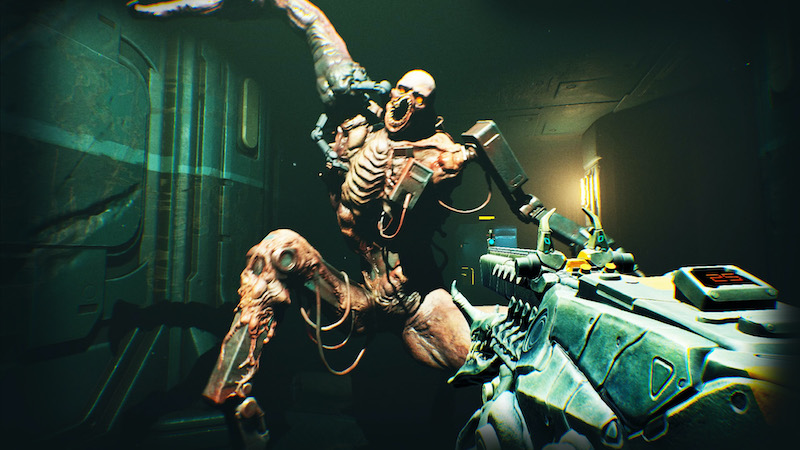 You might have gotten used to seeing ‘retro’ titles from 3D Realms as of late. But Pet Project Games’ Ripout isn’t that. This FPS is 100% modern.

Since its revitalization, publisher 3D Realms has had a pretty nice track record. Retro-shooters like Ion Fury and Wrath: Aeon of Ruin have been great, and there’s much more to come with more than a handful of titles still set for release here in 2022.

One of those is Ripout, a game that’s decidedly not retro in look or feel. A demo recently arrived on the PC for the game, showcasing just what players will be in for when the full retail release arrives.

And while the game is definitely modern, it plays off of a couple of classics, to some great effect.

So what’s with that name anyway?

Ripout, as a name, refers to the game’s way of expanding the player’s armory, though we’ll get back to that in a second. Before we do, let’s dig into the narrative behind the action. While it’s fairly unique, it hits on a couple of notes that you’ve no doubt heard before.

Basically, an artificial intelligence created in order to fight alien threats goes bad. Cell, the AI, pretty quickly turns on its creators and nearly wipes them out. Mankind is driven to the edge, but makes a last second escape from Earth and into deep space. But of course Cell gives chase, and more or less plagues the human caravan.

Players are cast as a trooper who’s been specially outfitted and trained to wipe out Cell ‘infections’. And with the AI being able to overtake and mutate humans to serve as its thralls, that’s a good thing.

Using its own hardware against it

Ripout plays like most FPS’, with lots of shooting and the standard movement options. Almost. Where it differs, and this does shake things up quite a bit, is that Cell’s infections offer modular parts.

Ever see a little hand running around with a gun stuck on its back? Well you will here, and using your sorta-alive ‘petgun’ (exactly what it sounds like) you can grab these little creeps and graft them onto your character.

That means you can pick up added weapons and more, and turn the tables against the freakshows stalking Ripout’s corridors. Oh, and speaking of, navigating those halls can be a challenge. Ripout is meant to be a co-op title, and solo play can get tough to watch your own back since the game’s levels are so dark (though you do have a flashlight).

But basically you’ll need all the firepower you can find, especially if you’re battling through alone. You’ll need upgrades too, which are another big part of the game.

As you play, you’ll come across upgrade stations here and there in the procedurally generated levels. It’s there that you can choose between those buffs, and boost your health, your petgun’s abilities, and more.

Ever played System Shock? If you have, you might notice that Ripout holds a somewhat similar aesthetic. It’s kind of like Shock mixed with 3D Realm’s own (original) Prey in a few ways. Add in Doom 3’s generally dark corridors (and flashlight), and you have a good idea of what Ripout looks like.

None of those observations are meant to be knocks by the way. Personally I love all three of those titles. So to see a game that works in some of their ideas, even if it’s not in an overt way, is frankly pretty awesome.

And if, like me, you like that general look, you’re going to love what this game has in store. It’s a heavy industrial feel, with lots of cables running everywhere, plenty of still-illuminated monitors glinting in the darkness, and weighty blast doors obscuring the terrors behind them.

And as for those terrors, they are horrific indeed. As I mentioned earlier, you’ll find blobs of flesh and metal, fused together and dotted across the map. Some of these are simple mounds, and some are gore-tinged tunnels that lead through the map itself.

The former can house monsters of various shapes, that spring to life as you approach and tear themselves free. The latter serve as burrows for those little hand-like beasties I was talking about.

The bottom line is they’re all grotesque. And to see one drop down right next to you, while you spin around with your flashlight, can be… well it can really be something else. The whole experience works really well, and this early taste of what the final title will dig into is extremely promising.

Personally, I can’t wait to play more. Though next time, I might have to bring that squadmate to watch my back.

Ripout is expected to launch some time this year for the PC, Xbox Series X|S, and PS5.

Jason's been knee deep in videogames since he was but a lad. Cutting his teeth on the pixely glory that was the Atari 2600, he's been hack'n'slashing and shoot'em'uping ever since. Mainly an FPS and action guy, Jason enjoys the occasional well crafted title from every genre.
@jason_tas
Previous Trailer: Meet Team Orochi, coming to King of Fighters XV this August
Next Trailer: Shadowrun Trilogy quests onto consoles