The team has dispersed to the ends of the earth, but they are nowhere near done in BPRD: Cometh The Hour #2.

a continuation of BPRD: Cometh The Hour #1 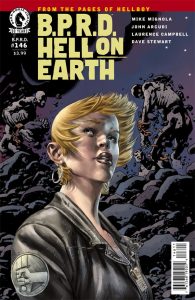 So like any ‘end of the world’ scenario, there are deaths. Many unimportant, and a few that are worth note. What’s a good story without some of this drama? We’ve lost some friends, but we’re not finished. Liz Sherman and Johann Kraus are on the front lines, while Kate Corrigan tries to hold things together at H.Q. At the end of the last issue, things were definately left on an ominous point. What to do now?

Well, the team is in the middle of playing cleanup, as well as continuing the battle forward. Though Johann whisked Liz off to some undisclosed location. The question now is, who gets to tell Liz of the aftermath? Meanwhile, Johann is having a bit of a crisis of his own, dealing with self-acceptance, and self-discovery. While this has not hindered his ability to be a dependable team player, it makes you wonder how it will affect him, moving forward.

When the BPRD is involved, you never know quite what to expect. Thankfully, we rarely have to worry, since they are much better equipped than the average investigation force.

Laurence Campbell’s art style is realistic and yet at the same time gritty. You know well what is happening, although you never lose sight of what is at stake. It is a fine line sometimes when determining what to show. Mignola and his team never seem to disappoint here. With several people in multiple locations, the story is a touch slow, though the content is worth it. I’m really curious to see where they end up going with Kraus here.

In the end, Liz does what everyone expects she’ll do. Johann’s self-awakening leaves us wondering, and we still don’t know what to make of the little demon girl, Varvara. Varvara is ruthless, and has grand plans indeed. Commenting on the giant men and the beasts as part of their plan. Though how far does plan go? We will have to see how much of her plan comes to fruition – and more in BPRD #147.

Hell On Earth: Cometh The Hour is a bit of an implosion. When you think you know what will happen, guess again. The BPRD have their hands full these days.

A fan of media on multiple platforms, I am always watching or playing something! Who knows what I will be on to next?
@mackeyp42
Previous Tempest Expansion Avaliable for Endless Legend
Next Hellboy Black Sun #2 (Comic) Review