On the surface, the first issue of Lady Killer 2 is an action-fest featuring a femme-fatale that keeps readers entertained with its violent sequences and the promise of mystery. Hidden behind the brutal murders, writer Joelle Jones plants a seed for readers patient enough to see it grow.

The premise of this series-sequel gave me a very Kill Bill-vibe; a series I really enjoy. Upon reading, the comic was a fun experience, but did not bring anything new to the femme-fatale archetype. Truthfully, Lady Killer’s protagonist Josie fit the female assassin too well.

She is crafty, sexy and most importantly, ruthless. Other characters also fit simple archetypes. Josie’s husband, Gene, fits the oblivious but caring father role, while his mother hates Josie. Despite this simplicity, it might be too early to make a judgement on their development.

Jones knows how to create a violent, fun comic and this definitely shows in the situations Josie finds herself in. In fact, the comic is exhilarating as it is bloody. Despite being a huge part of what the series is, the bloody action is coupled with compelling, psychological drama.

Lady Killer centers itself on Josie juggling her two professions, bloody assassin and model housewife. While not completely a unique premise, the series spices it up with its exceptional art and the fact that it takes place in the 1950’s.

The color work and lines are crisp. The reds of the gore and of Josie’s eyes serve as a focal point in the comic, setting a fierce tone. The paneling and lettering all harmonize to create a truly gritty experience. In fact, the panels almost look like they were torn straight from files from a Noire detective movie. 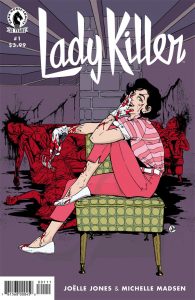 The pages are accented with easily unnoticed splatters which echo the blood Josie is so comfortable spilling. The artistic direction of the comic screams grit. This rough image is in direct opposition to Josie’s seemingly perfect life a housewife.

Jones interjects duality every chance she gets, echoing Josie’s life. Great art aside, the comic’s greatness doesn’t come from its bloodiness. Instead, it comes from small instances where readers can perceive Josie’s inner conflict.

Some of the deeper moments in the comic come from Josie’s attempts to reconcile her professional life as an assassin and as a ‘50s housewife. Joelle Jones includes moments like Gene’s boss harassing Josie and her being virtually helpless in the situation.

In this regard, the comic stages the two parallel realms of Josie’s life quite well. Having just finished murdering two rich, old women, Josie plays the role of hostess for her husband’s boss. Ironically, Josie disguises herself as the hired help to kill these women. Now, she is donning the same guise to woo her husband’s boss. Jones masterfully crafts this tale of duality, forcing Josie to wear the same guise and fight two very different problems.

When her mouth is grabbed, Josie’s surprise is palpable. She, a ruthless assassin, is forced to deal with harassment in the interest of keeping her (housewife) life intact. Publicly, Josie is limited by what ‘50s women should be. Privately, she’s a one-woman army. Jones’ strength as a storyteller shines in showing how Josie must deal with this restrictive reality, while essentially having already liberated herself.

Choosing to end on a cliff hanger, readers are forced to stick around for the resolution of the mystery, albeit cheaply. The housewife-by-day and assassin-at-night balance seems to work well with Jones. Even considering how entertaining the assassin aspect of Josie’s life is, I would’ve wanted to see her being more of a part of the family. Other than Josie’s love for her husband, Josie doesn’t really come across as a family-type. This might create some tension in readers as the Josie is supposed to be balancing these equally important parts of her identity.

Lady Killer 2 #1 will be available on August 3. If you want to read more about it, check out the comic’s Dark Horse page! Will you be picking up Lady Killer 2? Let us know in the comments!

Dash of Badass, Pinch of Houswork

Overall, Jones weaved a story that is fun on its own, but proves to be much deeper if readers want to go along for the ride. If you want a violent, bloody distraction, starring an awesome assassin, Lady Killer #2 is for you. Just don't be surprised when you stick around for more than just the gore.

Fledgling gaming journalist based in New York. Let me level up your JRPG knowledge! Follow me on Twitter and Instagram for geeky gaming tidbits. Catch me on all current-gen consoles and on Steam.
@GamingGil
Previous Daydreamer Finally kind of Arrives on Consoles
Next Wrath of the Eternal Warrior #9 (Comics) Review