Valiant Entertainment’s Eternal Warrior has been around since the early 1990s. Debuting in 1992’s Solar: Man of the atom #10, Gilad Anni-Padda (the Eternal Warrior) proceeded to get a 50 issue comic series from 1992 until 1996. Fast forward 20 years, Wrath of the Eternal Warrior attempts to successfully relaunch the series within the modern era. 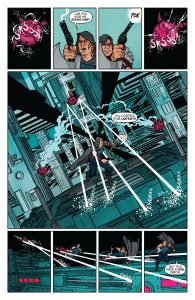 Wrath of the Eternal Warrior #9 continues the Labyrinth Arc initiated back in #7. The last we left our tortured protagonist, he was breaking through the glass chains that shackled him and preparing to take the battle to the enemy. The still shrouded in mystery villain, Sovereign, stared back in shock as the immortal Gilad stepped through the threshold.

As someone who only has a passing knowledge of the original incarnation of the Warrior, Wrath of the Eternal Warrior‘s first few issues did a passable job of setting up the rules that govern this particular world. As such, the first 3-4 releases did feel a bit too exposition heavy and slow paced.

Backstory: The End is the Beginning is the End

Gilad died protecting a young girl and Earth itself from an evil and powerful practitioner of magic, Master Darque. Gilad finds himself in the afterlife, surrounded by his loving family, but comes to the realization that his living work might not be done.

Ushered on by a sense of responsibility, Gilad fights through a gauntlet of demons to reach the Gates of Life. Once passed, he returns to the mortal plane to continue his good work.

Wrath of the Eternal Warrior really begins a few issues in, as Gilad reawakens to find himself NOT in the coffin he was buried in. No, six feet under would be a lot more comforting than this infernal mountain. 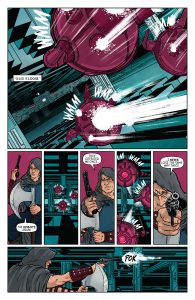 Robert Venditi script continues to favor action, with the plot being pushed to the wayside, for the most part. And I am completely fine with that.

The Labyrinth Arc offered an instantly intriguing premise, one that does not require a large amount of character development or plot twists to propel the reader forward.

Gilad must escape a Labyrinth that offers ALL of the ways to die. So, he obliges them. And dies time and time again, well learning ever slightly more about the place he is in and the man behind it all.

Part 3 sees Gilad plow through soldiers and weapons as he makes a beeline towards the Sovereign. In turn, the Hiding Man continues to attempt to learn how Gilad manages to do all that eternal stuff. This issue seems to be the penultimate addition to the series, which does explain the lack of information or any real plot development within it. One must expect that Part 4 will focus almost exclusively on revealing the details behind the labyrinth and the Sovereign.

Gilad is, by far, at his best here. Angry and aggressive, the way he taunts and terrifies the nameless soldiers that face him succeeded in carving an ear to ear grin upon my face. Saying that, the opposition he faces in this part did feel a bit too much like fodder. This Labyrinth served multiple times as Gilad temporary resting place, yet now it seems all rather easy.

Art: The Colour of Blood

Raul Allen and Patricia Martin pen the ink for Part 3 and they keep up the quality seen throughout the series.

Bloodlust is the theme of the day, with an overabundance of crimson red washing over most panels and backgrounds. This choice helps bring to life the emotion felt by the Eternal Warrior, amplifying the intensity with each stroke. Fans of gore will be more than happy.

I also particularly enjoy the sense of depth given to the Labyrinth, which helps balance how rather dull the environment actually is (metal, so much metal). The character work is top of the line, though.

Valiant’s Wrath of  the Eternal Warrior continues to build momentum in an explosive entry to the current arc.

Ever since Mark first learned how to walk and talk, games have been a part of his life. Just about missing the SNES era, Mark spent most of his weekends with a Playstation controller in his hands, saving the Isles of Wumpa and watching his brother attempt the now infamous Lara Croft hidden trick. A lover of sarcastic characters with big swords, Mark favours Hack n' Slash and JRPGs, although every genre is worth trying more than once. Favorite genres:Action, RPGs, JRPGs, Hack n' Slash
Previous Lady Killer 2 #1 (Comic) Review
Next The Chernobyl Project: A New Step For VR