Get an early look at an unlettered version of Rai #14, when Valiant Comics’ “The Summer of 4001 A.D.” continues. 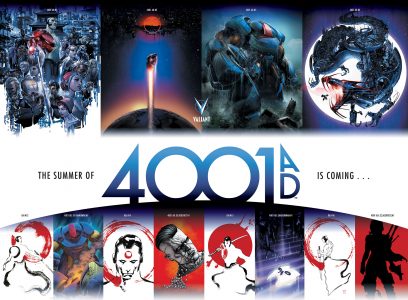 One of the biggest events of the year in comic-don and the biggest for Valiant, 4001 A.D. tells the tale of things to come for the publisher’s characters in their popular superhero universe. Most of the big names will be in attendance for this one, in one form or another, but there’s probably no character that’ll loom as large as Rai.

The construct of the digital overlord of Neo Japan named Father, Rai has cast free his virtual chains and landed on Earth. His mission now is a bit different than it’s been, instead of keeping Father’s twisted vision of peace on the floating Asian city, he’s instead trying to bring it back down to where it came from.

But the person who wears the guise of Rai in 4001 is just the latest to do so, and there’s been a long line of others before him. And that’s where Rai #14 comes in, as this issue begins to tell the tales of those who came before…

For the first time ever, witness the violent foundation of Father’s space-born utopia of New Japan…and, with it, the shocking genesis of the line of guardians that bear the name Rai! Born and bred by Father to enforce peace at any cost, follow the next Rai and their successors across two millennia as they chronicle the history of 4001 A.D. – from the launch of New Japan into orbit to the latest Rai’s crusade to bring it crashing back down to Earth!

From Matt Kindt and CAFU, Rai #14 will continue the events of issue thirteen, and hits stands on June 10th. The brutal tale of what comes after the modern era of Valiant’s universe is about to unfold across the rest of the publisher’s catalog too, as well as a four issue 4001 A.D. mini-series that starts up in May.

Watch for the following books, landing on the racks from May through August:

Jason's been knee deep in videogames since he was but a lad. Cutting his teeth on the pixely glory that was the Atari 2600, he's been hack'n'slashing and shoot'em'uping ever since. Mainly an FPS and action guy, Jason enjoys the occasional well crafted title from every genre.
@jason_tas
Previous Brand new screens rise for Dead Island Collection
Next Is an ‘Xbox One II’ coming at E3?