This is it, Valiant’s biggest even of the year kicks off in Book of Death #1. 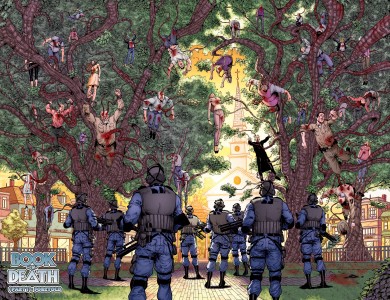 As massive event books go, Valiant Comics has sort of shed away from them till Armor Hunters. Yes, they had crossovers before that, but nothing to the extent that Armor Hunters tied together all the corners of the Valiant U, and it’s various heroes and villains.

Now that Book of Death is here, it looks like the publisher is well on its way towards another such event. Unlike other major publishers, with their years events, I like to think that Valiant’s approach is one that makes the eventual crossovers all that much more impactful. This one being case in point.

Book of Death is painted as a mini-series that will test the current Valiant U, foreshadow what’s to come, and maybe create a new major villain. While I’m not here to spoil anything, especially if you haven’t heard who that villain actually is, I think it’s safe to mention that it’s someone that you might not have thought of, and a character from a section of Valiant’s stable that hasn’t had a heck of a lot of light shed on it since the company’s rebirth.

As for the first issue of this new event, it starts with a series of ‘bangs’. 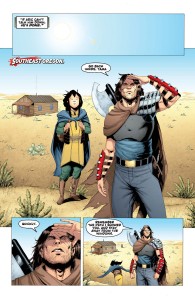 Right off the bat, we find that nature is out of control, and that people are being massacred by the Earth itself across the American west. This series of events is seemingly being caused by an out of control Geomancer- a girl named Tama that was sent back from the distant future by the Eternal Warrior, Gilad Anni-Padda, at the close of The Valiant.

Here’s the thing though, it’s not her. No one knows that though, except for Gilad and the new Geomancer. There’s another one though, the one that’s supposed to be in this time period, and he’s being controlled by a greater evil. An evil that seeks control of the world and so much more. But since Gilad doesn’t really want to share this info yet, he’s hunted by pretty much everyone. And yes, that includes Unity, who has a face-off with Gilad in this issue, one that promises a bang-up issue #2.

Other than the fact that it’s a little bit frustrating that Gilad wouldn’t want to simply tell Unity what’s happening, the first issue of Book of Death is suitably awesome. Packed with action, as well as supernatural weirdness and Valiant’s core group of heroes, the issue also gives readers a look at what’s to come should things go south.

Using the Book of the Geomancer, a tome that only Geomancers can read, we get a look at exactly what went down in the timeline of Tama. Writer Robert Venditti crafts a fascinatingly dark vision of what could have come to pass for the Valiant U if Tama hadn’t been sent back. And that’s including some nasty fates that would have befallen its champions. What happens now is what’ll play out as Book of Death continues its four issue run.

Illustrating this time-altering tale are both Robert Gill and Doug Braithwaite, and they do a phenomenal job. High-tech military hardware, the massive GIN-GR, superheroes, and otherworldly phenomena are all carried over to the comic in excellently realized ways. This should of course, come as no surprise if you’ve read Valiant’s line in any meaningful way, as the artwork is more often than not pretty awesome. There are some neat special effects too, in the way of some brilliant color and lighting work done by David Baron, but you probably expected that.

Not a whole lot to dislike about this one as Book of Death gets a proper start as the big Summer event book for Valiant in 2015.

It’s not perfect mind you, I would have liked to have seen a little bit more of David (the second Geomancer), but the everything sets up nicely for what’s to come. And with this kind of a story, you do want a little mystery- especially since the main villain is meant to be one till we’re further along.

All in all, some terrific art and an excellent script more than likely means that Book of Death will be another feather in the cap of the publisher. And I can’t wait for issue #2.

Jason's been knee deep in videogames since he was but a lad. Cutting his teeth on the pixely glory that was the Atari 2600, he's been hack'n'slashing and shoot'em'uping ever since. Mainly an FPS and action guy, Jason enjoys the occasional well crafted title from every genre.
@jason_tas
Previous New Arkham Knight DLC released; Batman 89 skins coming next month
Next Godzilla stomps onto the PS4/PS3 this week