For the greater good! 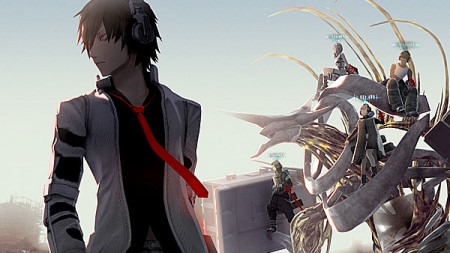 Freedom Wars is a JRPG to its core. From the stellar voice-acting and the gorgeous visuals, to the great character development and intense battles, everything is well done and excellently executed.

The visuals look great for a Playstation Vita game. There are no delays and no stuttering (even during the game’s most intense moments), and the various maps are a quite sight to look at! I  enjoyed the (although limited) designs for the enemy monsters that are known as Abductors as well, and watching them go berserk as the player character and his party dismantles him piece by piece is something that I won’t forget anytime soon.

I have always wanted to feel like Eren or Mikasa from the anime series Attack on Titan as he flies from building to building to get to the enemy’s vulnerability, and in this case it’s not just the neck that the enemy should look out for. Each part can be cut-off for crafting materials and each part that is cut off will deal a significant amount of damage to the enemy abductor- so keep that in mind.

The characters were masterfully designed.  I am a fan of artwork from shows like Macross and Fate/Stay Night, but the Death Note-ish appeal that this game delivered was something I instantly fell in love with. The characters, in this case, are a reflection of what they look like and that’s something that not just anyone can portray or do.

Sure, the voice acting helped, but the cleverness in the character design really pulled it off for me. The choice in clothes feel very Japanese too… if that even makes sense. What I mean is that everyone is dressed like a Japanese pop star, even the prisoners. Bonus points for style, I suppose.

For me, the controls felt great right away and the Technical Control style, which is a combination of the Thorn Master Control Scheme and the Gunner Control Scheme fits my play style perfectly. I usually disapprove of the various control options presented in other Vita shooters but the controls in Freedom Wars feel great, intuitive, and are easily learnable.

Weaponry in Freedom Wars come in several variants – Thorns, Autocannons, Light Melee, Heavy Melee and Assault Weaponry. Thorns are the main accompaniment for every sinner. These thorns are rope-like and are used to bring down Abductors so the player team can tackle the giant villains for an all-out attack (Did you see that, Shinji? Oh, wrong game) and are generally used to traverse the maps ala the 3D Maneuver Gear from Attack on Titan.

Mastery of the Thorn is as vital to the game as your ability in shooting is. The Thorn comes in 3 variants:  Attack Thorn, Healing Thorn and Shielding Thorn, and each have their utility and strategic value in game- so choose your thorn and your party wisely. Autocannons are heavy artillery such as Laser Cutters, Missile Pods, and Rocket Launchers and are used to deal heavy damage from afar. Light Melee weapons are the brunt of every party’s strength as these weapons are the only ones with the “cutting” capability. Cutting works by attaching your Sinner to an abductor and cutting off their parts for additional materials, not unlike Monster Hunter.

Heavy Melee weapons are the Masamunes and Buster Swords of this game. They are big and slow, but they pack quite a punch. Full utilization of these weapons lie in their strategic value in that they can damage multiple enemy parts in one charged swing. Assault Weaponry is mainly used in PVP and they’re comprised of Submachine Guns, Sniper Rifles and Blaster Rifles. They are pretty standard weaponry and work well against enemy infantry.

Freedom Wars presents its players with a satisfying level of lore and a deeply intriguing story as well. People who are born on Earth, at this point in time, are all considered expendable unless they have a talent they can share for the growth of the various home cities called Panopticons. Those born without talents or anything to offer are given a Million-Year Sentence that they must pay-off by serving their home Panopticon as a Soldier.

These citizens are called “Sinners” for the crime of “being born” and all of them start out without rights, not even the “right to sleep in an inclined Position”, and any infraction or ‘abuse’ of these rights are rewarded by a couple hundred years extension as a Sinner. The prison sentence is paid off by donating materials to the home Panopticon or by fulfilling missions for them which gets funny at times, due in part to the AI partner. Called an accessory, your partner can be given comments such as “Don’t burden the Panopticon by dying in battle” is  – very classy, Freedom Wars! 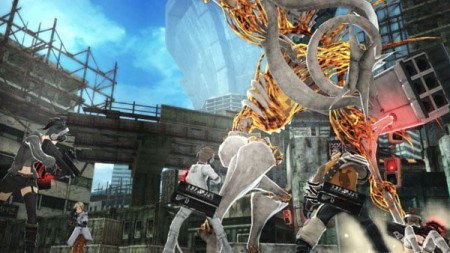 Single Player Missions are separated into three categories: Retrievals, Showdowns and Resource Gathering. Retrievals have the player character and his party rescuing civilians from Abductors or just looking for them while dodging enemy fire. The missions end when each Civilian is returned to the Home Base – You can think of it as a more dangerous game of ‘bring me’ with what a dozen armed men and a giant mech chasing after you and your party.

Showdowns are further split into two kinds, as the first one pits the player character and his party against a single boss Abductor and the main goal is to destroy the abductor before it destroys you and your party. The second one acts like an endurance test of sorts where the player character and his party are pit against 2 or 3 extremely powerful versions of the abductors, while some of them even come in waves. Resource gathering missions are straightforward, you dodge enemy fire while gathering the various resources that the panopticon needs from the field.

These missions are divided according to their difficulty and the risk that they present. Players begin at CODE 1 and progress their way to CODE 8. Each Code comes with various abilities that the player can purchase, such as the ability to wield weapons, to retain rarer materials, or even to simply talk to the opposite sex. One thing that won’t change however, is how the various Citizens treat you and your character as a burden and as something replaceable. Yup, you will always be treated like crap.

Multiplayer missions work the same way as the Single Player Missions, but with an addition of a PVP mode and an Invasion Mode. The PVP mode is split into 2 playstyles, the first play style is destruction mode where the goal is to eliminate the enemy team before they eliminate you and the second play style is a retrieval mission with the added bonus of player-controlled Characters rushing to finish their objective faster than you and your team could. Invasion Missions basically have players looting other Panopticons for a shot at a place at the top. Steal enemy GPP, Earn GPP. That’s the essence of the invasion mode and forms the core of the City-State War Mode.

The City-State War Mode for the Western release has various Cities and States (Manila, Los Angeles, Hong Kong) against each other in terms of Global Panopticon Rank and Local Sinner Rank. The ranks are determined by the activities each player performs in these Panopticons so people are expected to always work towards the greater good. It’s a unique concept and a fun one at that too which adds a substantial degree of competition between players from all over the world.

The game also features an intricate crafting system that may actually be too difficult for beginners looking to try out the game, but if I can say anything about the crafting system it’s that it’s extremely fun and addicting to try and make a better weapon than what the other people in your Panopticon 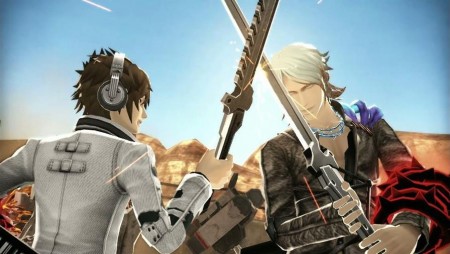 have. As players get stronger weapons, missions get easier and PVP gets a little better. I can confidently say that the weapon crafting may be one of the highest points of this game because the feeling of competition is always present and in part, adds a ton of hours to the overall game time.

The characters in the game are voiced by an all-star cast, from Akira Ishida (Gundam Seed’s Athrun Zala), Joji Nakata (Fate/Stay Night’s Kirei) to Sora Amamiya (Aldnoah.Zero’s Seylum or Touka from Tokyo Ghoul) and they all execute their parts perfectly. The Japanese dubbing sounds really good and is a definitely bonus for fans of Japanese Animation and JRPGs in general. The characters also feel well rounded and developed and this is emphasized by how different they treat you every time you and your party successfully advanced to a higher code. This is more obvious with the player interaction with Beatrice but saying anymore would spoil the game.  The characters are likeable and are all generally memorable and this fact is cemented by the sheer awesomeness of the Japanese dubbing.

The Music in the game is tense when needed and soft and caring when necessary. It features one of the better soundtracks that I have heard from a Vita game recently. I especially like the various battle OST’s. Some will make you feel like a hero while some make you feel hopeless and weak (which is how you’re going to feel against the more advanced abductors- you’ll see). Overall, the music in the game feels good, sounds good and would make a great addition to any playlist.

Customization is one of the better aspects of this game. Players are able to customize everything from the color of the status screen to the clothes and physical appearance of your Sinner to even your waifu err I mean AI partner called an Accessory. There are a number of clothes and accessories to purchase and over a hundred different ways to make your Sinner and Accessory pair match and be unique together.

Without spoiling anything, the ‘ending’ of Freedom Wars doesn’t feel very conclusive, but I am optimistic that things could be resolved with a few good DLCs. In fairness to SCE Japan, they have released a ton of DLCs for free but Freedom Wars is good enough to make me want and be willing to buy a paid story DLC.

Freedom Wars is a great game with its level of competitiveness, the awesome story, likeable characters and wonderful music. If done right, this could potentially change the way we play the Playstation Vita as we know it today. It’s a must-play for any Playstation Vita owner and a definite must-buy for people who like games like Monster Hunter and Toukiden.

Benj likes video games, neckties and scotch. His favorite games include Resident Evil 2 and Final Fantasy VIII. You may contact him at [email protected]
@ggburroughs
Previous Rage of Ultron cover revealed, shows two eras of Avengers
Next Details on Saints Row IV Re-Elected and Gat out of Hell released