Gilad must leave his throne and take up the sword once again as a crisis in the present leads to possible devastation for what’s left of humanity in the far future. 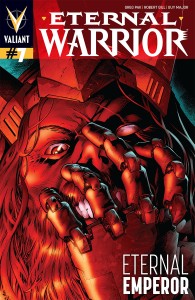 King Gilad Anni-Padda hoped to leave his days as the Eternal Emperor behind him. But when an unforeseen challenger threatens the future of his kingdom, Gilad must put down his crown and pick up his sword! After years of peaceful rule, will Earth’s immortal champion seek out justice – or give into his own savage nature? And what terror wrought in the modern day has led to this terrible turning point?

To put it simply, if you’re not reading Eternal Warrior, you’re doing yourself a disservice as a comic book fan. The title is absolutely loaded with action, action, and more action. Gilad is as compelling a character as I’ve seen in a good long time too and his sheer breadth of life encompass all of the Valiant modern U. and I mean all.

There’s no time travel involved here, Gilad is an immortal and has lived form the time before history to the far-flung future of the excellent and detailed universe that Valiant is still building. He’s a great all-encompassing hero/anti-hero and one that was sorely in need of his own comic. Now that he has one, writer Greg Pak has been on a roll with it and has etched some massive new tales with it.

That might sound like a lot of ‘big words’, but I’ll stand by them. This is a book you should not be missing and it’s a great time to hop on board with the whole 4001AD plot line set to explode with not only Eternal Warrior, but also Rai #1, which is on the way for April.

Eternal Warrior #7 will be on sale a bit before that, as it lands on the racks this coming Wednesday, March 26th.

Jason's been knee deep in videogames since he was but a lad. Cutting his teeth on the pixely glory that was the Atari 2600, he's been hack'n'slashing and shoot'em'uping ever since. Mainly an FPS and action guy, Jason enjoys the occasional well crafted title from every genre.
@jason_tas
Previous Sega dances with the dead in new Typing of the Dead Overkill DLC
Next Murdered: Soul Suspect gets Limited Edition and a new trailer