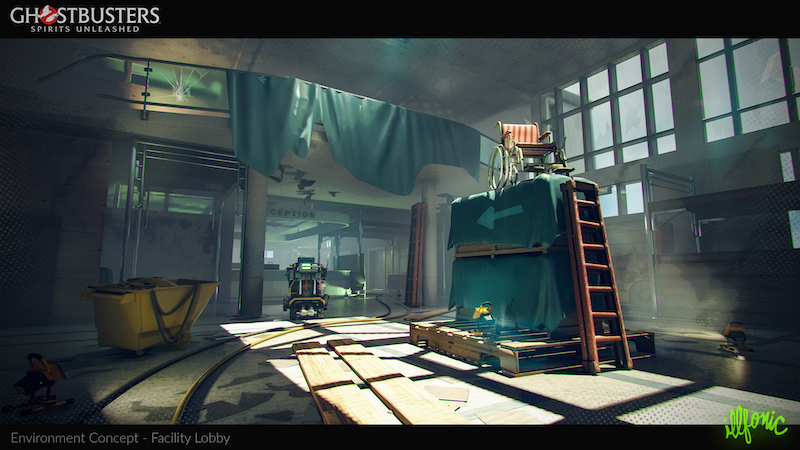 Home / News / Here’s a taste of what’s on the way for Ghostbusters: Spirits Unleashed in 2023

Here’s a taste of what’s on the way for Ghostbusters: Spirits Unleashed in 2023

While IllFonic’s Ghostbusters: Spirits Unleashed launched with a little bit slim on content, it’s set to expand in 2023, starting with The Facility.

It’s been closed up for a while

There’s a thought in the paranormal world, about places and spaces that have been closed off for a while. Namely, that things tend to move in when the living move out. Those can be spirits of the departed that haven’t yet moved on, or darker entities. And for it’s first post-launch expansion, Ghostbusters: Spirits Unleashed is playing off of exactly that theme.

Dubbed “The Facility”, and set to launch in 2023, Spirits Unleashed’s first new locale will offer up an abandoned location. Well, formerly abandoned, as The Facility has been bought and is set to be renovated. But before the new owners can get to that, there’s a little paranormal infestation that needs cleaning out.

At launch gamers were able to hunt or haunt through five unique maps in Ghostbusters: Spirits Unleashed. Early in quarter one of 2023, IllFonic will be adding a new map to the mix, The Facility. The Facility closed for good in the late 1980s and has been recently purchased by a private investor group, who have plans to renovate and reopen the facility. Unfortunately for them, it’s being plagued by ghostly activity, and construction crews refuse to enter this haunted health center. Design Director, Jordan Mathewson shares what makes playing this map unique, “The look that this play space is worn by time gives the players a unique feeling compared to our current job locations [maps]. Construction workers are civilians and have begun a restoration of this facility that has uncovered why it was abandoned in the first place. Varied corridors combined with medium-sized rooms are built stacked up to provide a unique, more intimate gameplay experience with a creepier aesthetic. There will be some interesting ways to utilize these new areas in this map to each player’s, Ghostbuster or Ghost, advantage. We will share more soon!”

Now, along with the new location, you can’t help but notice that Ghostbusters: Afterlife’s Muncher Ghost is also showing his ugly mug in the gallery above. The little (?) fellow (?) will be included with this new expansion, and yes you can play as him. Players will be able to gobble the scenery in The Facility (and beyond), and spook the ‘Busters coming to save the day in the game’s asymmetrical multiplayer.

In addition, the pack will include some new customization options, though those haven’t been reveled just yet. What has been though, is that IllFonic plans on releasing a pack like this one every quarter through 2023. So while there might’ve been a little less that desired content at launch, Ghostbusters: Spirits Unleashed should fill out quite nicely by year’s end.

The game is out now for Xbox and PlayStation platforms, as well as the PC. If you have yet to pick up a copy, you can check out our review of the Series X|S edition here.

Jason's been knee deep in videogames since he was but a lad. Cutting his teeth on the pixely glory that was the Atari 2600, he's been hack'n'slashing and shoot'em'uping ever since. Mainly an FPS and action guy, Jason enjoys the occasional well crafted title from every genre.
@jason_tas
Previous Trailer: Mystical first-person action title Blacktail landing on December 15th
Next Trailer: Firefighting Simulator – The Squad battlin’ blazes now on consoles