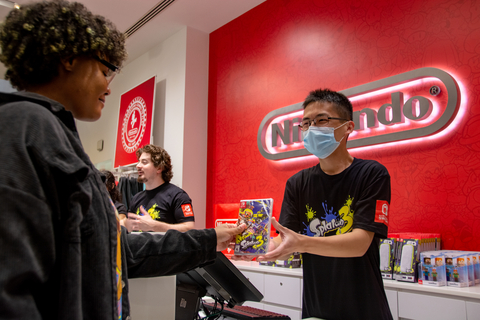 In this photo provided by Nintendo of America, Enid M. from Far Rockaway, NY is one of the first consumers to purchase the Splatoon 3 game for the Nintendo Switch family of systems during the launch event at the Nintendo NY store in Rockefeller Plaza.
Home / News / Time to paint the town neon, as Splatoon 3 launches at 30 Rock’s Nintendo NY

Time to paint the town neon, as Splatoon 3 launches at 30 Rock’s Nintendo NY

Splatoon 3 is set to bring a little colorful arena shooter action to the Switch today. Be ye Inkling or Octoling, we’ve got the highlights of the launch.

This one’s been a long time coming, as Splatoon 3 was first announced about a year back. It’s finally here though, and set to continue the series’ cartoony take on the multiplayer arena shooter.

The title officially launched at Nintendo NY last night, right in the heart of 30 Rockefeller Plaza. The in-person midnight event included the first copies sold in the States. Those looking for some special flair walked away happy too, as the flagship shop was decked out with “vibrant visuals straight out of Splatsville” for the launch. Of course that included a splatterific photo op for fans.

As for the game itself, Nintendo has shared a laundry list of features for Splatoon 3. So if you’re not sold yet, scroll on down and see if these bullets knock you off.

Along with the game, there’s also that new Nintendo Switch OLED Edition, carrying case, and Splatoon 3 Pro Controller. So depending on how big a Splatoon fan you are, you can really trick out your gaming experience.

All of the above is available now, depending on if you can still find it all or not. I have a feeling that OLED console in particular is gonna be a tough buy right now. Theoretically it’s available via Nintendo’s online shop, along with all the other Splatoon goodies, though it’s sold out as of this writing.

Still, there are some cool things up for sale, and you can find ’em all here.

Jason's been knee deep in videogames since he was but a lad. Cutting his teeth on the pixely glory that was the Atari 2600, he's been hack'n'slashing and shoot'em'uping ever since. Mainly an FPS and action guy, Jason enjoys the occasional well crafted title from every genre.
@jason_tas
Previous Call of Duty: Next to reveal the future of the franchise next week
Next Marvel and Disney to celebrate 60 years of Spider-Man at D23