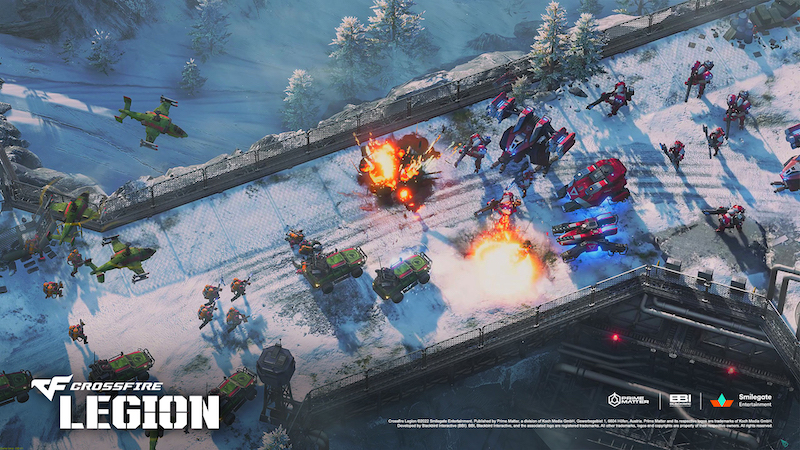 Have you been playing Prime Matter’s Early Access PC title Crossfire Legion? If you have, then you know that the game has been getting a steady evolution as it heads for its full retail edition.

Expanding with new story content and lots more, it’s shaping up to be a sharp looking RTS, that stays true to the genre. And in keeping with that, there’s another fresh drop to chat about.

This one includes a trio of new aircraft, as well as a new map (the Refinery), and part III of the campaign. Scroll down to check out the trailer, as well as get a more detailed look at what’s included with the update.

Oh, and it’s all available as of today. So hop to it and jump in.

Each faction will receive a new aircraft unit for enhanced aerial combat:

An exciting new map area that will bring extra volatility to player’s custom games and skirmishes in Payload mode is coming in this update. In Refinery, players fight to secure each payload amongst the hazards of a fuel refinery — using the strategic high ground is key in this explosive environment.

Campaign Act III will bring the mysterious New Horizon faction into focus, adding further depth to the immersive story of Crossfire: Legion. Blackbird Interactive has a rich history when it comes to creating engaging single-player campaigns – with the release of Campaign Act III, a new layer has been added to the narrative-driven campaign.

Campaign Act III consists of four missions (approx. two hours play time) that focus on New Horizon’s role in the ongoing conflict between Global Risk and Black List. As well as casting light on the mysterious New Horizon faction, and its commanders, these missions will help you refine your battlefield skills.

Take control of the battlefield (literally) and customize it to your desire. The map editor is a massive tool that gives you the ability to create fully functional multiplayer and skirmish maps and publish them on our Steam Workshop. Build any manner of battlefield and test your strategies and tactics against those of your fellow commanders.

Creating your own map doesn’t require any additional tools or special skills, it’s all contained in-game. And once done, share your creations by uploading directly to our Steam Workshop!

The only limit is your imagination. You can toy with:

Jason's been knee deep in videogames since he was but a lad. Cutting his teeth on the pixely glory that was the Atari 2600, he's been hack'n'slashing and shoot'em'uping ever since. Mainly an FPS and action guy, Jason enjoys the occasional well crafted title from every genre.
@jason_tas
Previous Gamescom 22: God of Rock introduces a fresh spin on an old genre… or two
Next New Jurassic figures arriving for pre-order, with Dr. Sattler and the fan-fave Dilophosaurus