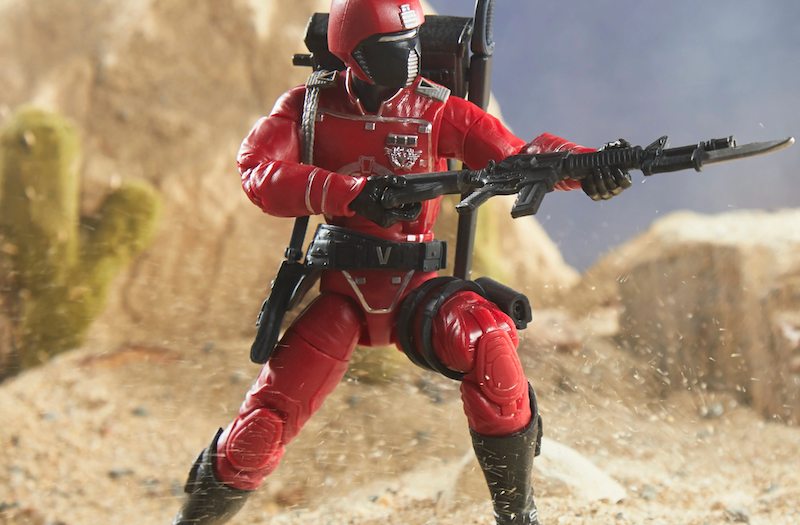 Hasbro brought it this week, with a fantastic series of G.I. Joe Classified announcements that included Joes, Cobras, and plenty of sub-team news.

It still is something of a marvel how G.I. Joe Classified has changed since its debut at Toy Fair 2020. That was only about 2 years ago, after all. But since then the line has gone from re-envisioning characters and adopting even more of a sci-fi feel, to being… well to being what many fans wanted it to be right from the jump. Namely, a 6″ version of the classic 3.75″ series.

Not only have we gotten wave after wave (as small as those waves are) of classic heroes and villains, but they’ve all been extremely faithful to the iconic versions. Even the weapons have changed from ‘Nerf’ guns to more realistic hardware. As a classic fan myself, it’s been fantastic.

Hasbro continued that series of announcements yesterday, with both wholly new figures and announcements of new “sub-team” members. Those included both Tiger Force and Python Patrol.

If you’d like to check out the full presentation, hit play on the YouTube window below. Otherwise scroll down for the higlights.

A blockbuster trio of fan-favorites joined the standard Joe Classified line, including Dusty, Zarana, and the iconic Crimson Guard. All three sport classic looks, though do have some minor updating. The Guard in particular looks like he was ripped right from the original Cobra lineup, and to great effect.

Not seen here though is none other than Sargent Slaughter. In a shock announcement, the Sarge will be returning to the Joe team some time soon, and much like the CG, he will be nearly 100% faithful to his original design.

There’ve been a few Sarge figures as of late from different lines, but if you’re a classic Joe fan it’s tough to beat what Hasbro is prepping here. Stay tuned for much more on him, as the design gets finalized.

The above are available for pre-order right now, from a bevy of internet retailers. That list includes our sponsors over at Entertainment Earth, so if you’d like to check ’em out there, just hit the links above.

As for the rest, those were the Target exclusive sub-team figures. Included there was the Cobra Python Patrol Officer, and three Tiger Force members with Recondo, Bazooka, and Duke. Looks like the rumors were true about a vehicle being thrown into the assortment as well, as Duke comes with the Tiger Force version of the RAM motorcycle. Check out the above video for that.

And again, these are Target exclusive. There were a small amount released on Hasbro Pulse as well, though those have sold through by now. Still, it’s worth it to keep an eye out there going forward. Past store-exclusives have popped up on Hasbro’s site from time to time.

Not mentioned above, but shown in the video, is a ‘blue’ ninja 2pack that includes a female ninja. Plus, Hasbro also added to the “retro” line with Zartan and Storm Shadow. Both look great, though they’re very close to the standard releases. Nothing here that was as stark of a difference as presented by Gung Ho.

On a related note too, the Tiger Force Duke has yet to see a pre-order. So definitely watch for the TF leader to hit that phase some time soonish, and likely on Target’s site. As for the rest, they’re all scheduled to ship some time in the first quarter if 2023. Allegedly.

As anyone who’s been watching toy and collectible shipments lately can tell you, Hasbro in particular has been announcing launch dates well beyond what they have turned out to be. So stay tuned, because all of these might be seeing store shelves sooner than later.

Jason's been knee deep in videogames since he was but a lad. Cutting his teeth on the pixely glory that was the Atari 2600, he's been hack'n'slashing and shoot'em'uping ever since. Mainly an FPS and action guy, Jason enjoys the occasional well crafted title from every genre.
@jason_tas
Previous Trailer: Zombie Army 4: Dead War debuts on Switch
Next Nintendo Download: Sports!