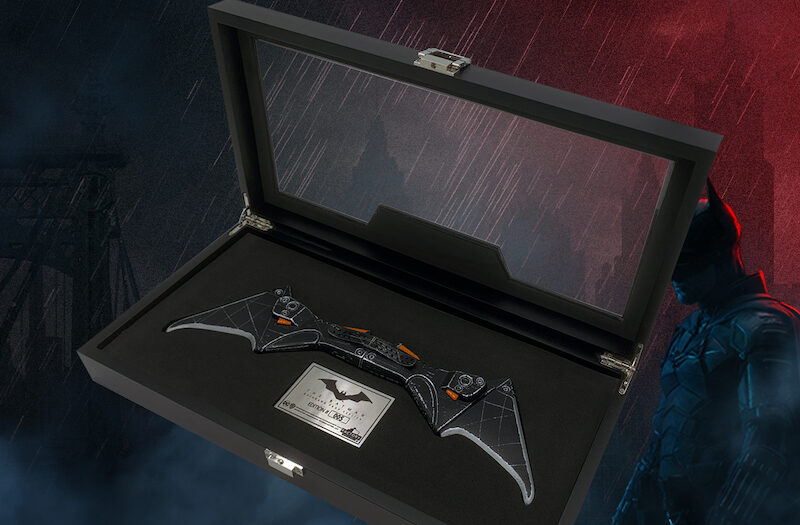 Factory Entertainment expanding DC offerings with The Batman and more

There’s plenty of DC Comics love coming up from Factory Entertainment, and it all starts with a Batarang replica from the new ‘The Batman’ film.

The Batarang is iconic. It’s a weapon that’s been seen in every single envisioning of Batman, be it film, comics, or video games. And so it’s only fitting that the newest version of the caped crusader will likewise use the weapon.

If you’re a fan of the dark hero, then this new version is something that you’ll be able to add to your own collection of memorabilia. The new Batarang comes home thanks to Factory Entertainment, who’ll have the prop out this summer.

If you’re wondering, the above is full-size to the movie prop. It was created via digital files supplied “directly from the production team of The Batman.” So if you’re looking for film-accuracy, this is it.

The Batarang is priced in at $299.99 USD, and can be pre-ordered here. Again though, this is just the first in a series from Factory. Fans can also expect to see Batman’s cowl and grapple launcher some time soon. Both of those will be full-sized too, and all together should make for a pretty great collection.

Additionally, announcers are on the way for stuff from Peacemaker, as well as The Flash (movie), Black Adam, and the upcoming Aquaman sequel. Lots to like there, if you’re loving the direct of DC Comics movies as of late.

Jason's been knee deep in videogames since he was but a lad. Cutting his teeth on the pixely glory that was the Atari 2600, he's been hack'n'slashing and shoot'em'uping ever since. Mainly an FPS and action guy, Jason enjoys the occasional well crafted title from every genre.
@jason_tas
Previous Trailer: Digital Deluxe Edition of King of Fighters XV launches
Next Trailer: Powerslave Exhumed brings the classic FPS back for PC and consoles