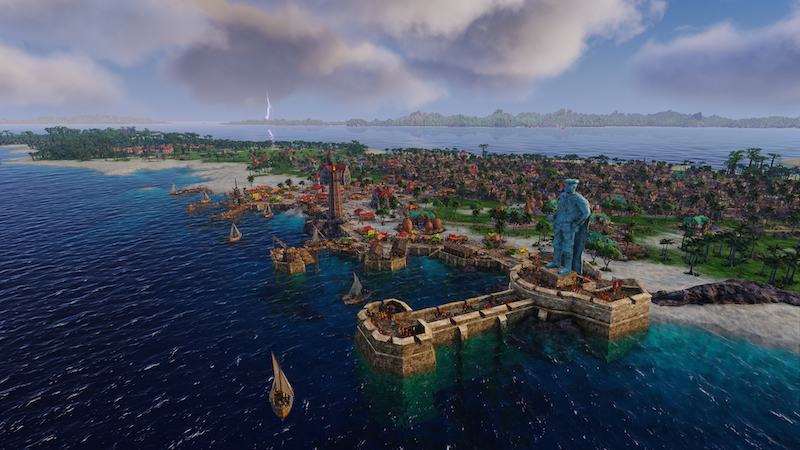 Kalypso’s trade-route sailing, Caribbean-set sim Port Royale 4 is out now for the PS5 and Xbox Series X|S, as the Buccaneers arrive on Nintendo Switch.

Port Royale 4 for new-gen consoles includes a stunning 4K game world on PS5 and Xbox Series X (1080p on Xbox Series S), cross-gen save capability and real-time cloud rendering, and is available in both standard and extended digital editions – the latter featuring exclusive digital content such as 4 lighthouses and the blueprints to 5 magnificent parks with which players can decorate their settlements. A boxed Extended Edition is also available at participating retail outlets including the ‘Buccaneers’ DLC.

Speaking of DLC, the Buccaneers DLC pack is here for the Nintendo Switch version of Port Royale 4 too. The content set allows players to actually build a pirate fleet and even raise the Jolly Roger. And as a nice little bonus, it is having a sale on the eShop. For the launch period only, you can nab the Buccaneers for 10% off its ticketed price.

Jason's been knee deep in videogames since he was but a lad. Cutting his teeth on the pixely glory that was the Atari 2600, he's been hack'n'slashing and shoot'em'uping ever since. Mainly an FPS and action guy, Jason enjoys the occasional well crafted title from every genre.
@jason_tas
Previous Wonder Woman heading into the Comic Con Hall of Fame next month
Next The Princess Bride figures hit McFarlane store with November launch