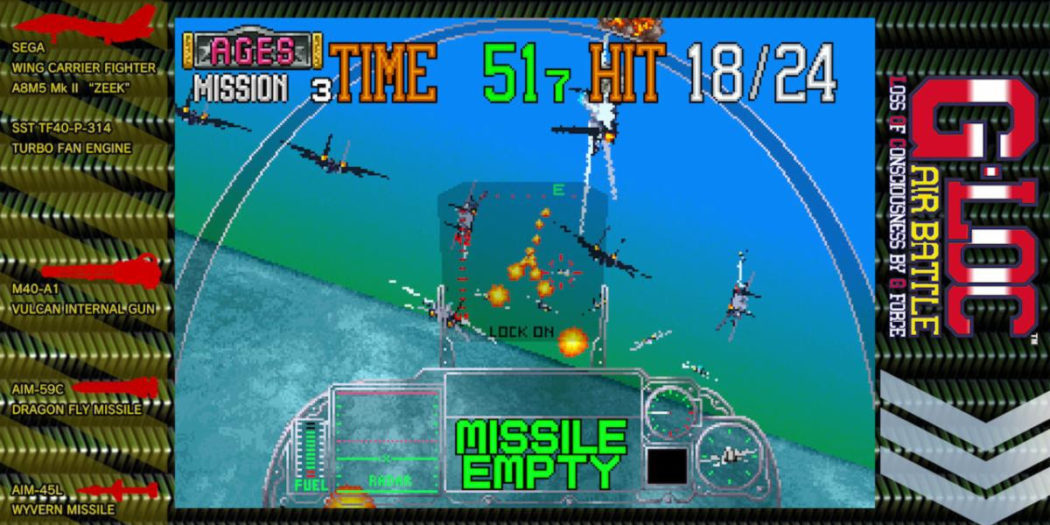 An arcade classic, Sega’s G-LOC offered up fast air-to-air combat action. Now the game will be flying onto Nintendo Switch as the latest Sega Ages title.

Sorry, no rotating cockpit this time

If you know G-LOC from the arcades, then you know all about the famous cabinet that it inhabited. The cab was cockpit-like, and actually allowed gamers to sit inside of it. It provided movement as well, giving a little 4D-type action to the game.

While you won’t find that in the upcoming Nintendo Switch version, you will find everything else that made the title a quarter muncher. And if you remember this one more from the Game Gear than the arcades, you’re in for a treat. That’s because the graphics are just a little better than Sega’s tiny portable screen could muster.

As usual with Sega Ages titles too, you’ll find a host of improvements to the game itself.

There’s never been a better time to try out this high-octane arcade title thanks to the all-new features introduced in this enhanced release. Shoot your competition down the leaderboards with online rankings, recreate that feeling of the original hydraulic-powered arcade cabinet with a moving cabinet display (among other screen options), or increase those g-forces to the max with AGES Mode, which adds more enemies, more missiles, and a more powerful lock-on system. Finally, the rookies out there can make the skies a little friendlier (or scarier) with multiple difficulty options.

Landing exclusively on the Nintendo Switch, Sega Ages G-LOC is set to arrive on April 30th.

Jason's been knee deep in videogames since he was but a lad. Cutting his teeth on the pixely glory that was the Atari 2600, he's been hack'n'slashing and shoot'em'uping ever since. Mainly an FPS and action guy, Jason enjoys the occasional well crafted title from every genre.
@jason_tas
Previous Wave 1 of DST’s Lord of the Rings figures up for pre-order
Next Streets of Rage 4 launching this month