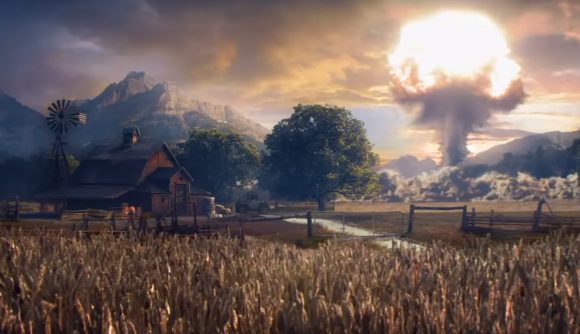 Earlier Ubisoft released a teaser trailer for the next far Cry game. It appears that for the first time since Far Cry Instincts the next game will be an actual sequel to the last entry in the series. Not an immediate sequel mind you. This one takes place many years after the ending of Far Cry 5.

(Far Cry 5 SPOILER ALERT!)
That ending being where a nuclear bomb lands on Hope County. Hold onto your gas masks boys and girls, Far Cry is going post-apocalyptic.

Judging by the short video, at least the air has cleared since the nuclear strike. Things have turned to rubble and humanity has fallen back technologically as we see a character load a circular saw into a crossbow (look forward to using that). It appears that decades have passed since Far Cry 5 as everything is growing back and the area is habitable again.

This certainly feels a bit soon to announce a new game in the series as Far Cry 5 was only released back in March. I actually hope there’s a lot more time until the release of this next game. Assassins Creed Odyssey was released under a year after Origins and one can argue they’re the same game. Only now there’s a handful of shiny things to distract you into thinking it’s a whole new game.

I simply don’t see how any real progress can be made in a game series when they’re released so close together. This makes me nervous.

You can see the worldwide reveal of the next Far Cry at The Game Awards tomorrow.

Massive game and movie enthusiast. In any free time I'm always playing something or watching something. I didn't choose the hermit life.
Previous Previews exclusive One:12 Cable announced, detailed
Next All current Ubisoft Club points to expire in April under new system