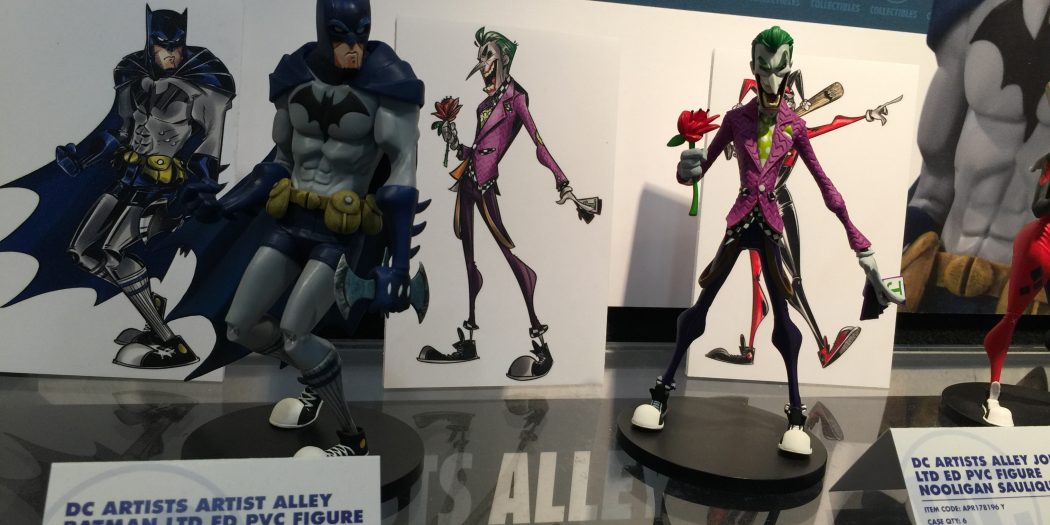 HaiNaNu “Nooligan” Saulque is kind of a hot property right now. The artist’s style is wild and original, with a sharply exaggerated bent. It’s cool stuff. And in this video shared today by DC Comic’s, he brings Joker to two-dimensional life.

Note: You might want to fast forward to about 3:20 in. The first part of the drawing is exceptionally hard to see.

Pretty cool stuff, huh? And not only was Saulque on the DC stage there, but he’s actually got a line of vinyl figures coming soon from DC Collectibles. We showed you a few of these in our Toy Fair coverage of the company in February, but it’s worth talking about again.

The initial wave of these figures will be based on the work of Chris Uminga, but wave 2 is all Saulque. His work features his own “interpretations of Batman, The Joker and Harley Quinn”, and is some very cool, and very unique stuff.

They’ll be hitting right behind Uminga’s Batman, Superman, and Wonder Woman figures this coming September. Oh, and right behind Nooligan’s stuff is Sho Murase’s stunning trio of Catwoman, Poison Ivy and Harley Quinn. Those will come in standard and “holiday” variations. Awesome looking stuff all around.

Check out our previous coverage here.

Jason's been knee deep in videogames since he was but a lad. Cutting his teeth on the pixely glory that was the Atari 2600, he's been hack'n'slashing and shoot'em'uping ever since. Mainly an FPS and action guy, Jason enjoys the occasional well crafted title from every genre.
@jason_tas
Previous Hitman: Definitive Edition coming soon, includes all DLC and extras
Next The big man is back. Shaq Fu: A Legend Reborn hits consoles this June