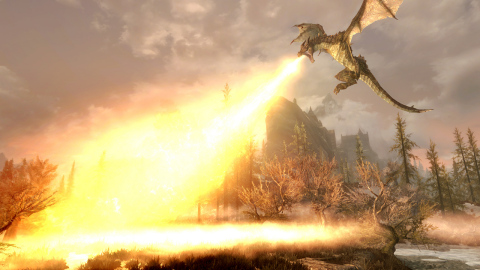 Home / 3DS / Nintendo Download: Battle the Dragons of Skyrim Wherever You Go

Nintendo Download: Battle the Dragons of Skyrim Wherever You Go

It’s another big week on the Nintendo Download, basically because of one game. Yes, it’s Skyrim week.

No gamer should be unfamiliar with The Elder Scrolls V: Skyrim at this point. The massive, open world RPG is available for just about every console under the sun at this point, and has become iconic… and also the butt of more than one joke.

Still though, it’s a modern classic. It’s also one of the most hotly-anticipated games for the Switch, and has been since its announcement.

Other than Skyrim (which hits tomorrow), The Nintendo DL also plays host to Gear.Club, and River City: Rival Showdown and Pokemon Ultra Sun and Moon on the 3DS.

Jason's been knee deep in videogames since he was but a lad. Cutting his teeth on the pixely glory that was the Atari 2600, he's been hack'n'slashing and shoot'em'uping ever since. Mainly an FPS and action guy, Jason enjoys the occasional well crafted title from every genre.
@jason_tas
Previous Corsair HS50 Headphones (Gear) Review
Next One:12 Collective Superman (Action Figure) Review