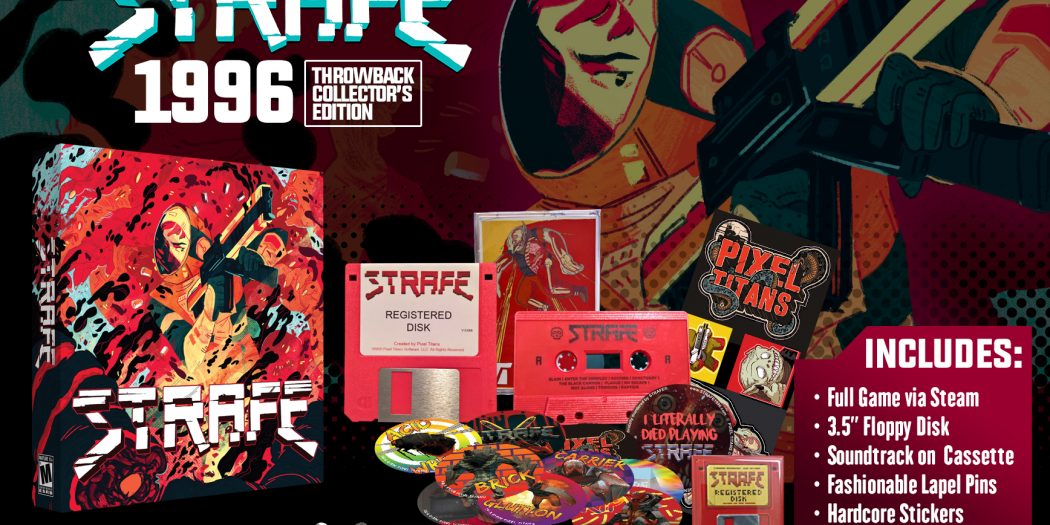 Have you seen Strafe? The uber-violent love letter to 90s shooters? Then you’re going to want to see these Collector’s Editions.

The big box is back! Sorta

Aside from in your face, over the top gore in games, the 90s were also known as the big box era for PC games. Though you wouldn’t know it now, since everything is digital, PC games used to be big business at retail stores. I remember the shelves at my local EB being overflowing with boxes. And most of those packages were monsters, some with cool pack-ins or interesting box features, all to make ’em as neat-looking as possible.

That era eventually turned into the little-box years. That’s when all PC game boxes were formatted similarly, after-which everything went digital. Well, almost everything. Every year there are still a few titles that go the boxed route.

Yes, like everything else about Strafe, it’s going to be for sale 90s style (as well as digitally). Devolver Digital and developer Pixel Titans have revealed no less than three CE’s today for the blood-soaked blaster. And yes, they’re all awesome.

Pick your poison, Strafe launches on the PC and PS4 on May 9th. Pre-ordering? Then you’ll get the “the exclusive in-game VV-1N weapon that will change the face of exclusive in-game preorder bonuses forever.” …I think that might be a possible overstatement there. Possible.

Jason's been knee deep in videogames since he was but a lad. Cutting his teeth on the pixely glory that was the Atari 2600, he's been hack'n'slashing and shoot'em'uping ever since. Mainly an FPS and action guy, Jason enjoys the occasional well crafted title from every genre.
@jason_tas
Previous Little Nightmares is Now Available for Download
Next Forts (PC) Review