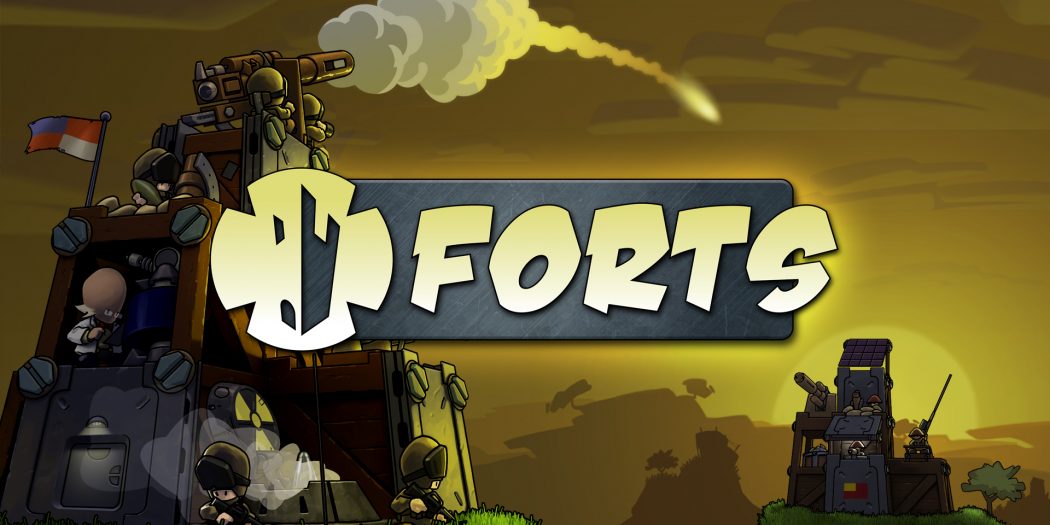 Forts is a physics based, 2d, real time strategy where the aim is to build a fort any way you see fit. Then blow each other to tiny pieces. It made me think of worms and Bridge Constructor. But instead of a bridge it’s a tower of death and destruction. Although only a small, indie, 3 man team it’s quite an impressive little game. However, that’s not to say it doesn’t have it’s flaws.

But why are we fighting…?

There’s not much in ways of a story here. Oil has become an extremely rare resource and three factions are fighting for whatever they can find while also hunting down the mythical “Motherlode”. A huge deposit of oil. It doesn’t go too in depth and most certainly does not take itself too seriously. All there is to know, and all you need to know, is that there’s a meany on the map and it’s probably in your best interest if you take him out before he does you. In the campaign you will play as each faction fighting through the world, and each other. Now, of course things kick off with a tutorial. A tutorial that doesn’t seem to end until the third factions campaign. Throughout all the missions of the first two factions you’re still learning things that you could’ve quite some time ago. It really just felt like the campaign was only there to prepare you for the multiplayer and get used to the mechanics. This isn’t the worst thing though as the games main focus is on the fort building. Which is where the game excels.

It is a rather strange experience to be building a base from the side. Certainly not something I’ve done before. Building works similar to most RTS games. You need to focus on gaining resources while slowly defending yourself and your reactor. Then as you collect more resources you start building your defences. There’s a good amount of turrets to choose from to keep your fort safe. It feels like there should be more but at the same time it feels like enough. The only downside is that your fort creation will be more or less the same every time. You’ll find a way that works for you and stick to it. If you’re like me and not very creative. But this is the case with any base building

Physics have a big part to play in the construction of your fort. You can’t just build up, down, side to side and have it how you want. You need to support it. Make a part stick too far out to the side? Say goodbye. It’ll sit there for a few seconds, bow and snap. Even if you build too much on one side the weight will pull the fort over. It makes you really think about how you’re going to build. It also makes you panic when you think it’ll be supported but that is not the case and it crumbles to the ground. We kill the fort man

You have a big enough arsenal to destroy your opponents fort. Having to build tech placements to unlock better defences and the ability to upgrade your weapons makes the race to arms a bit more tense. As long as everything is placed inside the walls of the fort there is no way to know what the enemy has built or how far along upgrading they are. It makes you uneasy as soon as their fort grows even the smallest amount. Your machine gun placements will help with your defence by automatically targeting incoming missiles.
There really is a sense of planning as your almighty tower of doom bringing can be brought to it’s supports in one shot if you don’t protect it efficiently.

Now, If singleplayer wasn’t enough to get you ready for the multiplayer then sandbox may just be what you need. I know it’s helped me with my designs. This is where you can choose any map and you have control over both forts on the map. You won’t be attacked unless you attack yourself. So you have all the time and resources you need to practice the perfect fort build. I used it to test what the best defence was. How much a barrier can take from a cannon. How much you can build until the weight pulls it down. It’s a very useful tool in the game that you should definitely use.

Then we have skirmishes. This is a simple 1 on 1 against the computer. Also a good way to test out any recent building ideas you’ve had. Only this way you will be getting attacked.

Now, I’m not normally one for multiplayer, especially not competitive. But this one I do quite enjoy. I’m not sure if more is going to be added but at the minute all we have is deathmatch. You can do 1v1. 2v2. 3v3 or 4v4. An 8 player

match can get a bit more intense than you’d think. You’re always worrying about who the other team is targeting out of the four of you.

You can also do this co-op. What’s the difference? I hear you ask. Well, in co-op you and your team mates (whether it’s 2 or 4 of you) share everything. Resources, forts, guns, all of the control. You can do this with multiple forts or just one. I found with one was the best way to do it. That way you can have one on the offensive and the other defending. It’s really an interesting way to play the game. And in my opinion, one of the best ways.

From just the singleplayer campaign there’s not much to rave about. It’s nice that they actually put the effort in to make one. But the whole thing does just feel like one big tutorial and it may have been only me but it suddenly felt like the difficulty shot up without telling me. I was nicely plodding through without a care in the world when all of a sudden I would be getting blown away in a matter of minutes. It definitely felt like the cannons had something personal against me.

A nice little extra for the multiplayer is the commanders. We have 9 to choose from. Each with their own speciality. Nothing that makes one so much better than all the rest. It’s mostly bonuses to construction. One will have cheaper repairs while another has instant upgrades. But, if this isn’t for you and you want it to be down to fort building and only fort building then you can simply switch them off.

Each mission has three objectives to complete, with each objective you receive a carrel of oil. You don’t have to complete all of them, only destroying the other fort. But you need a certain amount of barrels to unlock the next country. This gives the game a bit of replay value, if the game being a good bit of fun wasn’t enough for you, you’ve got the option of going back to achieve every objective.

Then of course there’s the multiplayer that should keep you busy.

Forts' singleplayer is pretty basic and starts to move onto the impossible side further into it. This brought it down quite a bit for me as I'm a singleplayer focused gamer. But it feels like Earthwork Games put most of their focus on the multiplayer, and it shows. Singleplayer is enough fun up to a point, skirmishes can be ok too. But the multiplayer is (and this is the first time I've ever said this) the best part of this game.