The second part of Valiant’s mini-series, “Savage,” dropped on Wednesday. The newest issue adds some context to the story we received in the first story, but doesn’t quite do enough in terms of its narrative potential.

The art, through diversity in scenes and more visuals, is better than the first issue, and is ultimately fun to look at throughout the entire book. 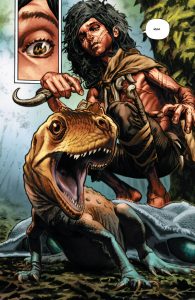 Without getting into spoiler territory, I can safely say that the second book in this four part mini series does a good job of giving the readers more information than they had at the end of book one. By the end of the second book, though, that is still not much.

We learn the fate of one of the parents that crash lands on the island, eventually leaving the young child to grow into the savage that we see in the begining of the first book and throughout the second. There are a couple time jumps, and while I ussually detest time jumps, I thought they worked very well in the case of this book. Each jump is prefaced by a bold title plate of where the time period is displayed. This works well in the context of the book.

We get introduced to some new characters as well. The ground is laid for a great final two books.

The dialogue in “Savage” does what it needs to do. Ideas are clearly conveyed, and I have no problem discerning what different characters meant in different circumstances.

The dialogue is very strong in certain areas as well. There is a baseline time progression in this book, and the infant boy from the first book is aged to about 5 or 6. When he speaks in this capacity, I had no problems believing that the child was a child, and not an adult writing for a child. 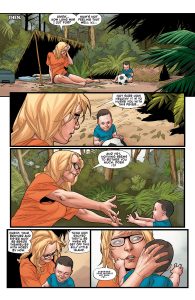 Other than the child, seeing the characters interact made sense, especially when dialogue was specifically used. If a character is talking to themselves, it feels as though it were thoughts they would say out loud. Nothing in the book used as dialogue feels forced., and reading it was not a chore. It was a joy to read through until the end of the book. Even then, I found myself yearning for the next issue of the book.

Much like the first book, the artwork contained in this volume is visceral in the truest sense of the word. We get to see a young teenager rip apart dinosaurs and humans alike.

This dangerous grip on reality by such a young character really makes you feel for the world that these characters are living in. Nearly no details are left to the imagination, and in the genre and tone of the book, I think that is a good thing.

Although the art is gory at times, it was a joy to appreciate the artists’ work. When the book ended, I was looking for more art to oogle. 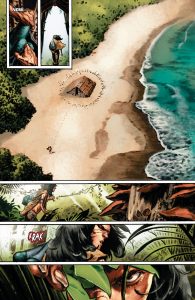 A fun, but maybe shallow, book:

Savage #2 is a great trip through an intimidating and horrifying world. Although we get some more insight on the characters introduced in the last installment, number two is a good place to pick up the mini series if the concept interests you. Concise dialogue, interesting art, and a developing narrative make Savage an easy sell.

Erich was introduced to gaming by his grandfather before he could walk. Since then, he has grown up loving Nintendo and most games in general. He couples his love of videogames with journalism to cover news, provide reviews and tell it how it is in the gaming world.
Previous Hello Neighbor First Impressions
Next Lobster Johnson: Garden of Bones (comic) Review