*disclaimer* – this is based on an alpha version of the game 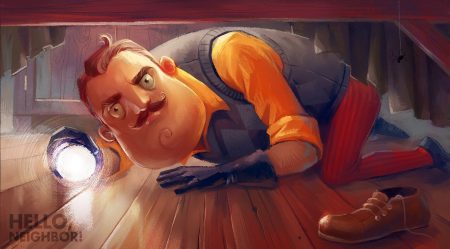 You can’t help yourself, you want to know more about this mysterious fellow across the way. Well be warned, this won’t be an easy excursion. This neighbor, whoever he is, values his privacy.

Now like I’ve mentioned, this is an alpha release. There are bugs. Things will break. It is expected at this point. I learned this right off the bat. My first time going through the neighbor’s house, I got as far as the third floor, before I found the neighbor. He was frozen in place, until you got about three steps from him. Then you were toast. I had found a hammer, removed the planks blocking the door that I wanted to get through, but had yet to find the key to the padlock. It felt like I was half-way to the goal.

Once you get caught, you are respawned back in your house. Any inventory you had picked up was gone. No harm, no foul, or so it seemed. So, I headed back over to the neighbor’s house.

There are plenty of rooms I haven’t seen yet. As soon as I was across the street, I knew this was not going to be an easy trip. There were security cameras on the porch, and bear traps in the front yard. Bear traps! There has to be an alternative.

No sooner did I get as close as the mailbox, the camera detected me, and out came the neighbor. I could run back to my house, and he would stop once he reached the street. It was apparent that him being stuck on the third floor was a glitch. He seems to linger on the first floor. I found a circuit breaker on the back of the house. Though there only seems to be one open door to the house right now. And I haven’t figured if you can open or break the windows yet, for a chance of a different route.

I’ve only been able to play for about an hour so far, so the glitches haven’t been bad. Aside from the one on the first run through. The music that plays when your neighbor is alerted to your presence will make the hairs on your neck stand up after a while. Knowing he is around the corner – if you are lucky enough to have that much space between you.

Now, you do have the ability to pick things up and throw them or use them. Use a key or a hammer. Though I have seen plenty of things, of which I have no clue what to use them for. Perhaps I can throw them at my chaser? Time will tell.

Based on what I have seen so far, Hello Neighbor should be an amazing game, if you are willing to try and outsmart the AI. You have been warned, he’s no slouch!

A fan of media on multiple platforms, I am always watching or playing something! Who knows what I will be on to next?
@mackeyp42
Previous Rise Of The Black Flame #5 (comic) Review
Next Savage #2 (Comic) Review