What if a biological terror agent wiped out most of humanity, and our domesticated animals were left in charge? How would our dogs and cats set about ruling and rebuilding the world? Pick up a copy of Legend. 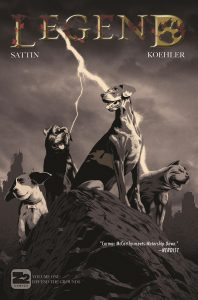 So many graphic novels these days follow a similar pattern: a likable good guy, a despicable bad guy, and some reason the two must meet. The writer or Legend, Samuel Sattin decided to throw this pattern on it’s side. The lines of good and bad are less clear. Legend has a story more along the lines of inner city gangs. Dogs vs Cats, and they must work together. But what will bring the two sides together? Dogs are thickheaded pack animals. Cats are portrayed as intelligent and aloof, except when it comes to their safety. When they have to work together , some will cooperate better than others.

The city is divided by the factions: dogs get the grounds, and the cat tribe has the warehouse. What remains is the thornwall, the climb, the great bridge and the wild. These are vast lands with no ownership, and many strange things occur. We will see that it apparently birds are on their own, and a badger works with the cats. 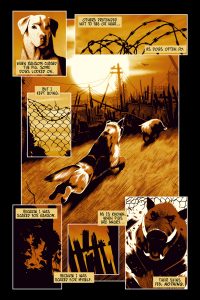 The Sunheart, the previous leader of the dog tribe, has fallen by a dark thing beyond the grounds, referred to as the Endark. Ransom the Sunheart, follows a boar beyond the safe areas of the grounds, and finds himself where he would rather not be. Things go south, and now his replacement will be appointed. Legend, an English Pointer reluctantly accepts the responsibility of being the new Sunheart. He will oversee what is to come, beginning with approaching the cat tribe, and convincing his fellow dogs it is in their best interest. To take on the mysterious creature known as the Endark.

Legend and the dogs seek out Bagheera and her cats. It is a colorful exchange. Name-calling and inults are traded, and it looks like the two sides may battle before an agreement is reached. Bagheera details her memories of the Fault. We see the fallout of what happened to the owners. The humans. When the skies betray those who reside beneath it. We learn that most of humanity is wiped out, and what remains is even less desirable. 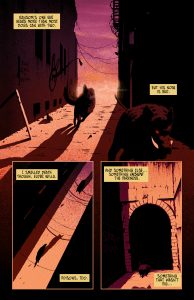 Legend, Bagheera and their clans have great hurdles ahead of them in the coming days of this post-apocalyptic saga. Traveling to unfamiliar terrain. Survive meetings with strained allies in the animal kingdom. Working to take down a mysterious, un-faced enemy.

A great story of two sides struggling to come together. Not easily, but earned through working side by side. Taking on the odds. We learn about Hoshii and the Alldog. If Legend and Bagheera are able to take down the Endark, where will that leave them? Is the Endark defeatable, or is there something else going on that we don’t know about? I would venture to say that there are plenty of twists and turns that Sattin will lay out for us in the coming issues.

If you are looking for a new story to sink your teeth into, you would be foolish to pass up the opportunity to check out Legend. A new spin on the post-apocalyptic storylines. How much can the dogs and cats accomplish? Is there more to things then taking down the Endark?

Legend arrives in stores November 29, 2016. Check out what happens when humanity falls.

Samuel Sattin and Chris Koehler have presented an amazing new graphic novel. Humans are not the top of the food chain, though they are not entirely gone either. Dogs and Cats must work together, though where will that take them?

A fan of media on multiple platforms, I am always watching or playing something! Who knows what I will be on to next?
@mackeyp42
Previous Valiant teases new X-O Manowar book
Next Bethesda pinball pack on the way