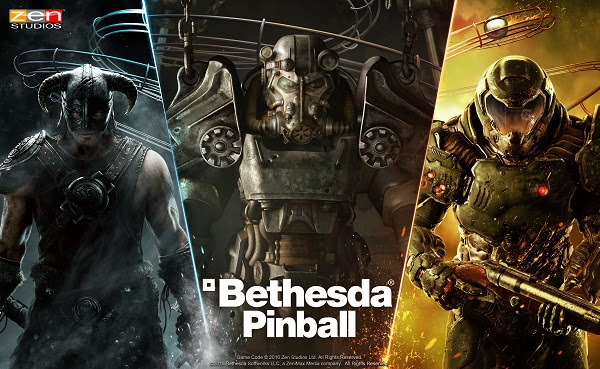 Bethesda pinball pack on the way

Landing next week will be a three pack of Zen pinball tables starring Bethesda’s Doom, elder Scrolls, and Fallout.

I haven’t played a Zen Pinball title in a while, but man are they great. Zen just has a knack for pinball simulations. And their catalog is super-deep with tables based on Marvel Comics’ cadre of characters, as well as a few video games and movies. I haven’t heard much from them in a little while though. Well, till now anyway.

But man, are they back with a vengeance with a Bethesda pack that includes tables based on Doom, The Elder Scrolls, and Fallout. Now that’s a crowd pleaser. And if their past efforts are anything to go by though, you can probably expect some pretty special stuff with these three.

Stay alive in the stunning yet hostile environments of three fantastic pinball tables inspired by the most iconic Bethesda franchises. Explore the secrets of the post-nuclear wasteland in a world decimated by atomic war, join Factions, raid Vaults and collect Bobbleheads on the Fallout Pinball table, fight your way through the UAC research facility while taking on hordes of demons to earn the DOOM Slayer name on the DOOM Pinball table, and craft weapons, wield magic, equip armor, buy and sell goods, mine materials, find trainers and complete side quests before defeating Alduin and fulfilling your destiny as the Dragonborn on The Elder Scrolls V: Skyrim Pinball table. Each table features leaderboards, score tracking, exciting social features, and more!

We don’t have any details on this pack just yet unfortunately, but we’ll probably be getting a much deeper look pretty soon. The pack hits consoles, mobiles, and the PC on the 6th of next month after all, which is right around the corner.

Jason's been knee deep in videogames since he was but a lad. Cutting his teeth on the pixely glory that was the Atari 2600, he's been hack'n'slashing and shoot'em'uping ever since. Mainly an FPS and action guy, Jason enjoys the occasional well crafted title from every genre.
@jason_tas
Previous Legend (Graphic Novel) Review
Next Harbinger Renegade #2 (Comics) Preview