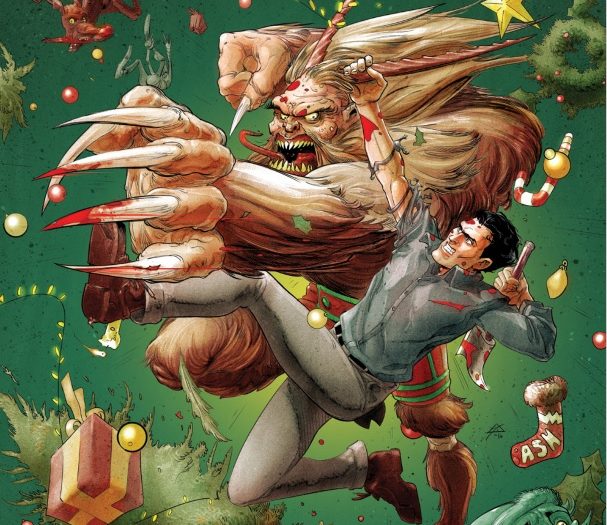 Ash meets a new neighbor during the holidays, and faces an old antagonist in Evil Dead 2: Revenge of Krampus. 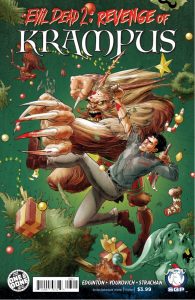 Ash is sitting comfortably in his trailer with a santa coat and a beer, wishing cheers to his clone brother, wherever he may be. Settling in to a quiet night with some microwave meals is his favorite way to celebrate Christmas. When he gets a surprising knock on the door.

Ash opens the door to find a half-dressed goth girl saying something is after her son. Of course, Ash being the dynamo that he is, will never pass up an opportunity to help a dame in need. He grabs his boogie shoes and heads for trouble. Inside the woman’s trailer stands a large, hairy, horned beast chasing after her son, who is not the least bit deterred by the thing. Come to find out, there is a universal ‘Naughty or Nice’ list. The good boys and girls get gifts from Santa, while the naughty boys and girls get a visit from the frightening beast Krampus. Ash, and his neighbor’s son are not the typical youth, however.

Krampus takes out his aggravation on Ash, while they work through their differences. They find some middle ground, and end up taking a break. Cut to Ash’s trailer, where after a couple of brews, Ash and Krampus are on the same side. Wait, what?!

But the story doesn’t stop there! Leave it to Ash to spin such a story on its face.  The writing is enjoyable, though even I didn’t expect the twist in this issue. This was definately one of my favorites of the Evil Dead 2: Revenge of series. Edginton portrays Ash quite well, and still manages to instill enough comedy to really make the issue memorable. Check out Evil Dead 2: Revenge of Krampus at your local comic book establishment. You won’t be disappointed.

Evil Dead 2: Revenge of Krampus is brought to you by Space Goat Publishing.

No one expects to encounter Krampus, let alone in a trailer park. Though who better to deal with the beast than the one-and-only Ash Williams.

A fan of media on multiple platforms, I am always watching or playing something! Who knows what I will be on to next?
@mackeyp42
Previous WWE 2K17 (PS4) Snapshot Review
Next Arkane Studio’s Dishonored Released