Ash Williams brings his unique brand of danger and shenanigans to a government installation in Evil Dead 2: Revenge of the Martians. 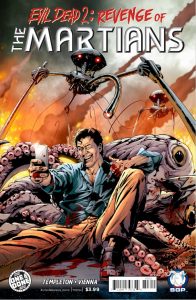 vil Dead 2: Revenge of the Martians

As you might expect, this story begins deep in an American government facility, far removed, in a remote location. This location is several times more secretive than Area 51. Sound great, right? Nothing can go wrong here.

Doctor Carter and his assistant Clarence are continuing their research and documentation of the artifacts in their possession. Doctor Carter comes in, ready to resume his work with the latest item.

Internet rumors? Seriously? We’re the government. We know what we’re doing or we wouldn’t be doing it.

What Could Go Wrong

Well, as you might expect, Doctor Carter is clutching in his hands a copy of the ominous looking book bound in flesh and inked in human blood. He is holding the Necronomicon Ex-Mortis. Clarence pleads with the doctor not to recite from the book. He is aware of the stories that surround this book. Unfortunately for everyone in the area, Doctor Carter chooses not to pay attention to Clarence, and trudges forward.

While on the other side of town, our favorite fool Ash Williams is an Uber driver. His latest fair has him driving into the middle of nowhere toward the aforementioned government installation. Ash and his fare turn onto Exit 13 and encounter something out of this world: a giant alien walking tripod. We don’t know yet who or what this is, but it scrapes up Ash’s Oldsmobile. That just won’t fly: Ash speeds after the tripod seeking insurance information.

From here on in, we are exposed to Ash’s signature wit, and willingness to throw himself in harm’s way. Ash is a combination of simplistic and ridiculous qualities. Throw in the fact there’s a pretty girl, and he’s up for anything. All-or-nothing, anything to get the girl. Add to this, the access to things stored deep inside a secret government building. Ash’s signature catchphrase “GROOVY” is strangely fitting, and at the same time satisfying.

Evil Dead 2: Revenge of the Martians is brought to you by Space Goat Publishing.

A fan of media on multiple platforms, I am always watching or playing something! Who knows what I will be on to next?
@mackeyp42
Previous The Seven Blades of Master Darque begins in the pages of Ninjak
Next 91 Days (Anime) Review