Issue #232 of IDW’s GI Joe ongoing is loaded with more storylines than you can shake a HISS at.

Snake in the Grass

Officially part three of the Snake in the Grass story arc, GI Joe: A Real American Hero #232 is overflowing with action. However, it’s a little too much at times and the jumping around does seem to get in the way.

Things kick off with some nautical action, following Deep Six (sans classic deep dive suit) and Cutter. The pair are trapped within a Cobra BAT facility. It’s a complex that turns out the deadliest BAT’s in the terrorist group’s arsenal. Now, I would have enjoyed just staying there. But that’s not to be, as we quickly move to NYC for a storyline involving Storm Shadow. Well, him and a young girl who’s been imprinted with the memories of the deceased Snake Eyes (spoiler alert).

And if that’s not enough, we also move to a Cobra base under the desert sands (with a bunch of characters I’ve never heard of). That’s before we top things off with Duke, Roadblock, and others as they see action in the fictional middle-eastern country of Benzheen. Yep, as I said, it’s a lot. 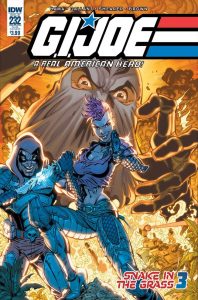 As you might imagine with all that, this issue moves fast. Writer Larry Hama is a legendary comic book scribe, and I only have the highest regard for his work (especially as an old-school Joe fan), but the pacing seems off here. There’s just too much happening, and none of it has as much of a punch as it should. And believe me, there are some big moments.

Thankfully, even though it does feel rushed, the writing is as fun as ever. Hama knows his Joes and he knows them well. I guess he should, since he’s been writing them since the original Marvel run of A Real American Hero (which this book is a continuation of).

Working nicely with the script too, is the art of penciler SL Gallant. I’m not overly familiar with Gallant’s work, but everything here is done well. He brings clean lines and a classic ‘superhero’ style of comic book art to GI Joe. It fits really well, and he variates nicely between all the locales that the issue takes readers to. Not an overly easy task.

I can’t help but get the feeling though, that there was an urgency to get storylines wrapped with this issue. It certainly seems like Hama was pushing things along gingerly, something that I’m not used to seeing. And I have to wonder if the reason for that is the oncoming Revolution event.

If you’re not familiar, Revolution is IDW’s first shared-universe. It’ll bring properties like GI Joe together with Transformers, Action Man, MASK, Micronauts, and more. All of them inhabiting the same universe. I love the idea, and what I’ve seen so far is extremely promising, so I’m all for it. What I don’t know though, is what’s happening to the ‘standalone universe’ Joe book that we’re talking about here.

If it’s going to stay separate and exist alongside something new, then I don’t get the need to wrap up four storylines in one issue. If not though, and the book is going to be replaced with a new one that’s in the new continuity, it makes a lot more sense. I just don’t know which of those options I’d prefer.

A Snake in the Grass

Classic yes, but four stories that are too rushed - 60%

There's a lot to like here for Joe fans who need their monthly dose of Joe vs Cobra action. And lets face it, I can't argue too much with another issue from the master of all things Joe- Larry Hama. That said, it's a little too busy for me and I would have preferred the issue focus solely on one or two of the four tales.

Jason's been knee deep in videogames since he was but a lad. Cutting his teeth on the pixely glory that was the Atari 2600, he's been hack'n'slashing and shoot'em'uping ever since. Mainly an FPS and action guy, Jason enjoys the occasional well crafted title from every genre.
@jason_tas
Previous BPRD: Hell On Earth, The Exorcist (Graphic Novel) Review
Next DC Comics preps Justice League v Suicide Squad and more for December