Lots of cool DC Comics stuff is on the way from Icon Heroes for SDCC. 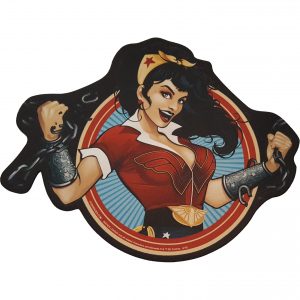 If you don’t know, coming up fast is the San Diego Comic Con (July 20th – 24th). And as you might expect, we’re well into the flow of exclusive-goodie announcements. And you bet Icon Heroes will have exclusive stuff on hand.

A Green Arrow paperweigh, as he appeared in the second season of Arrow, will be on hand. Joining him is Wonder Woman, who’s cast in the Bombshells style for the mousepad that you see to the right.

Rounding things out will be a pair of additional paperweights from Batman: Arkham Knight. Collectors will be able to grab both an unmasked version of the Dark Knight, and the queen of insanity herself- Harley Quinn.

Everything above will be available at the Icon Heroes booth (#3345), except for Harley. If you want to take Joker’s former gal home, you’ll have to head over to the Previews booth. They’re over at #2401. Oh, and as usual, make sure you get to these as a priority if you want ’em. Things have a tendency of selling out pretty fast in San Diego.

Jason's been knee deep in videogames since he was but a lad. Cutting his teeth on the pixely glory that was the Atari 2600, he's been hack'n'slashing and shoot'em'uping ever since. Mainly an FPS and action guy, Jason enjoys the occasional well crafted title from every genre.
@jason_tas
Previous Animation Comedy Idols Fight: The Card Game
Next Brutal Podcast 1: ReReVengence of the Technomancer