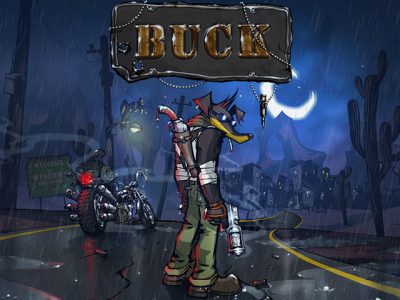 The 2D Metroidvania Adventure by Wave interactive is on Kickstarter with the intention of raising $30,000 in funding. The game will be available on Playstation 4, PC, linux, Mac and Xbox One. Moreover, the game will attempt a fresh take on the setting of a post-apolyptic wasteland within the RPG genre.

Furthermore, the game will have you play as an anthropomorphic garage mechanic investigating a girl’s disappearence as Buck comes to terms with life in a desolate landscape. The game will include the ability to craft and upgrade weapons alongside branching decision trees and include a number of different characters.

Although The game is still in its early stages, there is a sense of originality to this title and its main character; Buck seems as peculiar as he is badass. The new trailer shows what players can expect from the game and to be honest, it looks like a game any RPG fan can enjoy.

I am a writer and reviewer who is very passionate about video games of all genres from the RTS to the RPG and very willing to talk about them excessively. Other than that I spend my time writing creative pieces and critical essays for academic fields or browsing crunchyroll for new anime.
Previous Chocobo-palooza! Square-Enix Sale on PS Store
Next Titanosaur’s Addition to Ark: SE Receives Backlash