A brand new series from Dark Horse Comics and writer Cullen Bunn, Conan The Slayer kicks off to a bloody good start. 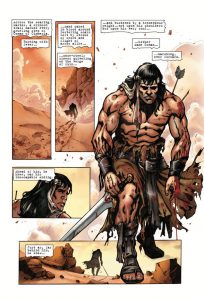 I’ve been reading Dark Horse’s Conan books for a good long while now. I’ve been a fan of the character since the Schwarzenegger movies in the 80s. For me, Conan has always managed to keep a certain magic about it as a property. It has plenty of action yes, but the Hyborian age is about more than that. There’s a mystery to Conan’s world, one that I personally find to be irresistible.

Conan The Slayer #1 starts off with plenty of the former, and -so far- very little of the latter. I can’t imagine it’ll stay that way for long though. The first issue drops plenty of hints at an evil still undefined, though we sadly very little of it. What we do get here in though, is plenty of Conan doing what Conan does best.

This issue doesn’t cast the title character in some of the worst shape of his life. When things open up, the Cimmerian barbarian is beaten and bloodied. He’s lost his men (all of them) and is trekking through the deserts in search of refuge.

His enemies are hot on his tail though, and there are no shortage of potential challenges ahead. Least of all, to that end, is an enigmatic Ghul that stalks the sands. We don’t se much of him though, which is extremely unfortunate, because he seems pretty freaking cool. What we do glimpse makes me think that there are some dark days ahead for Conan and pretty much everyone around him. Which is pretty typical for him honestly.

Cullen Bunn’s script sparkles, and is staged on a smaller-scale than many stories I’ve seen in Conan books before. All the while though, this is still the Conan that you know and love. Brash, rough, and not really giving a damn who he’s talking to, or fighting with. 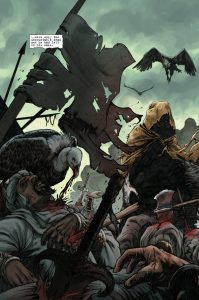 The book also continues the barbarian’s story in the southern lands of Hyboria, which is where we left off with him at the close of Conan The Avenger. I dig it quite a bit. There’ve been tons of Conan stories with him in the north, and the extended stay in a relatively new land is a welcome one. Plus you get to have all manner of new characters and monsters. That’s always a bonus for a Conan story, since there are usually some pretty unique spins on all of the above.

Taking up the art chores is Sergio Davila, and his style is both fitting and somewhat different. Back when I read Conan monthly (it’s been a while), I remember the art being somewhat rougher and having an almost primitive feel to it. That’s not the case here.

Davila’s artwork is very comic-booky, and I don’t mean that in a bad way. I dig this style personally, so I’ve got zero problems with it. If not for all the blood and guts, I’d actually say that Conan The Slayer looks a bit more like a superhero book than what I’m used to seeing the character cast in.

Oh yeah, there’s plenty of that by the way. Bloody swordplay makes a big, crimson splash across Conan The Slayer. With a title like that, it’s probably to be expected, but this Conan pulls no punches and hacks his enemies to pieces… literally. As a fan, I thought it was freaking awesome, but I guess that if you’re of a somewhat squeamish nature, you might have to roll past some panels kind of quickly. It is pretty freaking awesome though – this is Conan unleashed.

A narrative the drives its enemies before it - 85%

Artwork that hears the lamentations of the women - 85%

Is there some sorcery to go with this sword? There's potential... - 70%

A smaller scale narrative from Cullen Bunn seems like it's building towards something very much in line with what you'd expect from a Conan book. Complementing it is some fantastically splashy art from Sergio Davila... and plenty of bloody swordplay.

Jason's been knee deep in videogames since he was but a lad. Cutting his teeth on the pixely glory that was the Atari 2600, he's been hack'n'slashing and shoot'em'uping ever since. Mainly an FPS and action guy, Jason enjoys the occasional well crafted title from every genre.
@jason_tas
Previous Pokémon Mystery Dungeon on Virtual Console
Next Breached (PC) Review