Beautiful and valiant, but insubstantial.

While the majority of video games nowadays heavily focus on combat, there is a dedicated subset that is attempting to move away from that. Games that focus on story, exploration, and traveling through worlds that have obstacles that cannot be overcome with a sword or gun. Breached, from developer Drama Drifters, is the latest attempt to create a piece of art that finds its place away from the safe zone of gaming. Sadly however, like all experimental areas, there are mishaps and missteps, and Breached has many.

Breached is a game that starts shrouded in mystery. The player character is taken out of suspended animation to learn that his oxygen generator and power supply have both been damaged. He must pilot drones to scavenge supplies and mine minerals in order to make the necessary repairs. Along the way, the player learns hints about the mysterious planet that they are on.

The gameplay is very basic. Drones are controlled with the mouse only, one button to move forward, the other to stop. Odd anomalies roam the surface, destroying the drones, and must be avoided as the drone collects supplies. Some move while some remain stationary and pull the drone in.

Once the drone returns to the shelter, the player can unlock capsules as well as attempt to synthesize fuel. You are told what parts are located in the capsule and are given vague descriptions as to exactly how much of each. With the fuel, you must experiment a little bit, as you try and find the right combination of minerals. Each time you are given how pure your result was, and must adjust your formula next time to slowly work your way towards the correct, randomly generated, result

All actions take energy, which is replenished at the end of each day. With only eight days and each action taking up a considerable amount of energy, resource management is a large part of the game. Your drones being hit by anomalies cancels any progress they have made, wasting energy. With the clock ticking, this happening too many times could spell death for the player.  Every bit of energy is precious, and cannot be wasted on opening capsules that have parts you don’t need, or making one too many bad formulas.

The final part of the game is the logs that the player character has made. He makes a fresh one at the start of each day, but has much older ones in storage that act as clues to what happened on this planet. Every daily log comes with hashtags that link back to older ones, allowing the player to piece the planet’s history together. 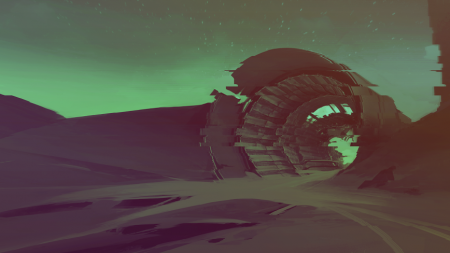 Why it doesn’t work.

Despite all of this, the execution of Breached simply feels underwhelming. The gameplay is uninteresting at best, and frustrating at worst. You either roam around a planet that you cannot interact with, or you struggle to find your way around/up a small mountain and then get ensnared by an anomaly on the way back. There’s nothing to do and you are forced to repeat this half a dozen times at the very minimum. Needless to say, what little appeal there is wears off fast.

The resource management holds up better, as the race against the clock can be genuinely tense. However, it is heavily linked to the drone segments. If you get caught by an anomaly, too many times, you will barely have any resources to work with. The biggest problem though, is for every minute you spend working in your base, you spend fifteen minutes working with the drones.

But that’s all we know. We never learn anything else, nothing ever gets fleshed out. We never learn exactly what happened to the planet, or what the anomalies are, or what the main character actually did. The concepts the game has are interesting, but in the end it only has questions with no answers. 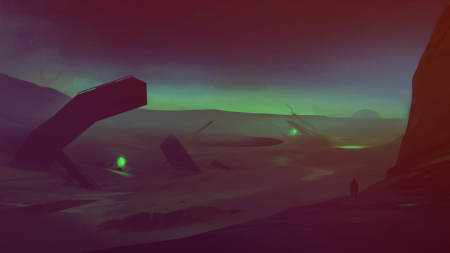 Despite its flaws, Breached does have quite a few admirable qualities to it. It simply looks breathtaking. The scattered buildings dotting the desert does an excellent job of showing the remains of a once thriving world. There are also a few little touches here and there that help bring gravity to the situation. The main character coughing blood onto the screen when his air is almost gone for example.

In the end, Breached was a game that simply couldn’t deliver on its potential. It’s a very depressing affair, because you can feel the effort in Breached. This isn’t a cheap cash in game, the people who made it cared. There is potential in Drama Drifters, especially considering that Breached is the first game that they have made. With luck, their next game will be much stronger than this.

Breached is available for PC and Mac

Ideas that simply don't work, made slightly more enjoyable by the way it is presented