What’s tall, dark, and as handsome as a mudokon can be? 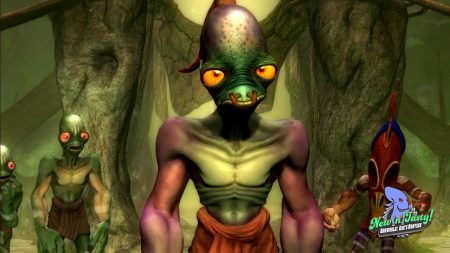 Abe, the methane-toting (or tooting) homunculus is back, and his quest to save his fellow mudokons from a lifetime of servitude rages on. Everything that made the classic Oddworld games so great returns, from those diabolically sensitive Slig (light-sleeping middle management with narcolepsy) to the frustratingly simple-yet-complex puzzles that usually had you scratching your head or banging it against the wall.

I forgot how much fun it was, each new screen being a new Rube Goldberg exercise in madness. The gameplay will forever hold a special place in my heart too, specifically where the heart attack I have is every time a Slig kills everyone right in front of an exit.

The puzzles themselves aren’t inherently difficult; rather, it’s the precise accuracy of execution for each puzzle that will have you wishing for the days of pong. This is all assuming that you’re taking the spirit of the game to heart, and attempting to save every single worker. Unlike me, who’d killed 13 and saved 2 by the time I had finished the first area.

I’ll be honest, to this day I’ve never liked the colour scheme of the factory in Oddworld (the Stranger spinoff stuff is beautiful); it falls into the same trap that other games do when they try to make the game feel dark and gritty; they use the same muddy, dirty, somewhat-dystopian palette of 30 different shades of brown, black, and dark grey.

It’s hard to look at and I found myself often missing key puzzle elements or even sleeping sligs because everything kinda blends together and my eyes glossed over it. By the time I got out of the factory though, I was blown away by the rest of the game’s visuals.

Every smudgy blurry creature from the PS1 days has been beautifully rendered and animated. The level of detail was phenomenal, I was shockingly impressed with how good Abe looks and moves. I also spent a good 10 minutes making Abe fart over and over to a small crowd of 6 followers like any sane person would, and it brought me as much joy as it did when I was a kid, only this time it was all in HD and fully rendered in 3D.

Maybe it was just me, but the audioscape had me believing we could all exist in the same kind of universe. The steam vents hissing, gears slowly turning, electric fences buzzing, sligs snoring, it’s like stepping into a whole other world, and it has a very real feel to it- like this is something that could actually exist.

The sound effects, ambient noises, creature sounds… every emotion and feeling is perfectly captured. The slow, pondering narrative style of the game didn’t seem to match the new oomph of the updated visuals however, at least in the early levels.

I’ve always found the Oddworld games to be the kind provides the atmosphere, the digital playground, and the player can just immerse themselves to the adventure. I mean, your main character is technically a mute. He says hello, he farts, and waves mudokons around like a Ringmaster at a circus.

Abe is a charmer, but he’s no speech writer. But as a character, he tells a strange and wonderful tale. At the end of the day, Oddworld is about Abe escaping and saving other mudokons from a lifetime of slave labor and bad posture, and to try to make it any more than that is just plain silly.

My only real gripe here are the strange Wii U controls. It takes getting used to them, and things are definitely not as user-friendly or intuitive as they could be.

Oddworld: New and Tasty is upfront and honest about what it is; it’s the same great stuff we know, but it’s shiny and new… and it’s definitely tasty. If you’re An Oddworld fan, or if Abe, Munch and The Stranger would be your top picks for companions on a desert island, I urge you to give New ‘N’ Tasty a try.

From the frigid wasteland of Canada, Dan has been writing since the early years, when a blank piece of parchment meant a whole world was waiting for him to discover it at the tip of his quill. Then he grew up and realized he could never be like Harry Potter, so he turned to video games instead. He's now a fledgling Game Designer, working hard to make his mark on the industry. In his off-hours, he likes to scorn people who like long walks on the beach. Too much sand.
Previous The Walking Dead Recap: 610 “The Next World”
Next Arbiter gets a Trailer for Killer Instinct: Season 3 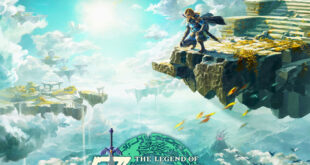 Nintendo Direct roundup includes a ton of big games, including The Legend of Zelda: Tears of the Kingdom

Nintendo set to discuss this winter’s games at Direct tomorrow 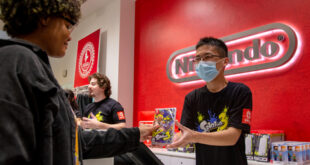 Time to paint the town neon, as Splatoon 3 launches at 30 Rock’s Nintendo NY 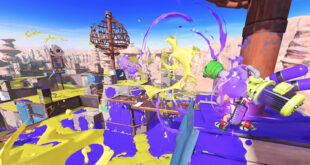 It’s Splatoon 3 week on the Nintendo Download! And since that means the release of …