Prior to The Fafnir Knight, I’d never played an Untold game, or any from its main series Etrian Odyssey, so don’t expect to see any comparisons to the previous games. This review’s a fresh take. 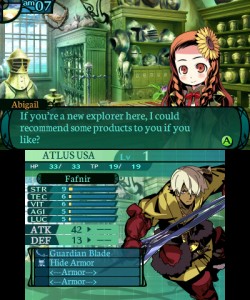 Fafnir Knight is a gorgeous JRPG world that’s rich in color, and hidden (as well as not-so hidden) lore. In Untold 2, you start off in control of your character and friend Flavio, two freshly graduated knights from the country of Midgard.

Your mission, assigned to you by the Library of Midgard, is to meet a contact in the forest. Once you meet this girl, named Arianna (who acts as your healing mage), you evacuate the wood and head back to civilization. When you’re safely back in the walls of the city, she makes it known to you that she is in fact a princess of the neighboring country.

As it turns out, Princess Arianna is on a mission as old as her country itself; her quest is to travel through Ginnungagap Ruins (yeah, have fun saying that out loud), and perform an ancient ritual of prosperity. Your job (made easier by the power of the Fafnir Knight) as well as Flavio’s job, is to make sure she completes this ritual unharmed.

I love hub-based role playing games. Yes, I really like the huge open worlds like Skyrim or Fallout, but I think the feeling of coming back from a successful (or occasionally disastrous) quest or dungeon run, and returning to the old tavern to fill up on mead and restock your potions carries much more weight.

That might be an unpopular opinion, and yes it does seem out of place, but I bring it up because that’s what Untold 2 is; it’s a hub-based game. Hub-based means that while there may be other locations, you always return to the same place (think Destiny). U2:FK doesn’t allow for any sense of free roam really, and that can make some players feel constricted, but I think for a handheld game it’s perfect. 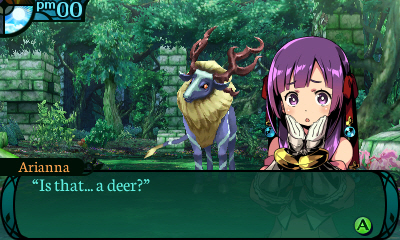 Movement in dungeons is restricted to tile based movement, and movement in towns is cut even shorter to navigating menus with changing backgrounds (a.e. A tavern background for the quest menu, and a small shop for the store screen). Traveling through the dungeons brought back a feeling most games recently haven’t given me lately: a strange sense of nostalgia.

The lack of free movement almost relaxes me, and makes me feel less pressure, especially since the orb on the bottom part of the screen will change color depending how close I am to an enemy… it takes a lot of the stress out of things, since the encounters aren’t fully random. They’re only hinted at, as you can occasionally be surrounded without knowing it.

The art is absolutely breathtaking in Fafnir Knight too. The 3D bits are flat-out gorgeous, and the game looks like a beautifully drawn anime in 2D. I genuinely enjoyed walking around the dungeons just to see what else I could find. Yes, it’s that good-looking. 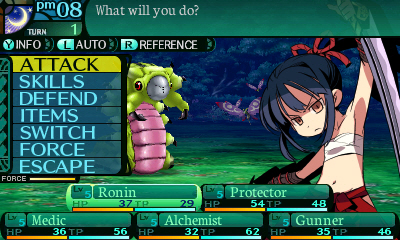 The combat is one of those easy to learn, hard to master situations, which I find is pretty typical in most JRPGs. Even so though, I suspect someone could just as easily make it through the game Pokemon style (AKA, slamming ‘A’ all the way through, and occasionally using a potion), if they really wanted to try.

As a whole, Etrian Odyssey Untold 2: The Fafnir Knight (goodness, that’s a mouthful), is a completely enjoyable JRPG experience, which brings a sense of nostalgia to anyone (like me) who grew up playing these types of games.

The simplistic plot brings it down perhaps a bit, and makes it feel a little less weighty, but it’s still a great game to have on a “to go” system like the 3DS, and I wouldn’t miss it if I were you.

Five parts actual review, 2 parts sarcasm, 2 parts bad puns, and one part self loathing = one of my game reviews.
Previous Ubisoft makes it official, Zombi coming to current-gen consoles and PC
Next PlayStation Players Get to Vote on PS Plus Free Game