The latest addition to the company’s DC superhero paperweight collection, Arrow is ready to take aim at your unruly stack of papers. 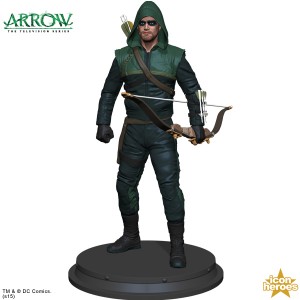 Sometimes cleaning up the city requires a hero… other times it requires a lot of paperwork! Why not have the best of both worlds with the new Arrow statue paperweight? Standing an impressive 8.6″ tall, Oliver Queen will keep your desk safe in this awesome collectible based on his first season appearance on the smash hit television series! Made of high-quality resin, this highly detailed and expertly painted Arrow statue paperweight features an incredible likeness of actor Stephen Amell and will keep those papers down while lifting Starling City up!  (Available 1st Quarter 2016, $50 SRP).

So far we’ve seen a few pretty impressive items from Icon Heroes in their DC Comics line, and now we have another with Arrow. Fashioned after the character as played by Stephen Amell in the original season of the CW TV series of the same name, the paperweight (which would also make a pretty nice statuette) stands in at 8.6″ tall and is crafted from a “high quality resin”.

He’ll be joining The Flash and Atom statues that we detailed not all that long ago in stores in the first quarter of 2016, and will cost $50.00 USD.

Jason's been knee deep in videogames since he was but a lad. Cutting his teeth on the pixely glory that was the Atari 2600, he's been hack'n'slashing and shoot'em'uping ever since. Mainly an FPS and action guy, Jason enjoys the occasional well crafted title from every genre.
@jason_tas
Previous Action Comics #41 (Comics) Review
Next Unity #19 (Comics) Review