Ray Palmer is about to get even cooler on the DC Comics CW TV show Arrow, with the addition of his shrinking abilities. And now you can add him to your desktop (or wherever) thanks to statue and collectible maker, Icon Heroes. 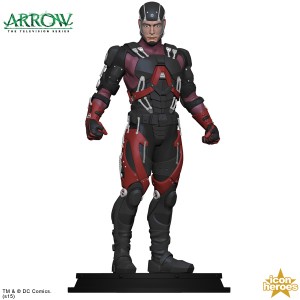 Is your paperwork expanding beyond its designated pile? Shrink it back down to secured size with the new Atom statue paperweight! Based on Ray Palmer’s design from the smash-hit television series’ Arrow, The Flash, and the upcoming DC’s Legends of Tomorrow, this highly detailed, expertly painted resin statue paperweight stands 8.8 inches tall and features an incredible likeness of actor Brandon Routh and stands ready to defend your desk! (But probably won’t shrink your workload!) Available 1st Quarter 2016, SRP $50

On a massive roll as of late is IH, making some super cool statues (paperweights) from Flash, as well as some neat collectible items like the Batarang and Flash letter-openers. Of course, we’re already fans of the company from their awesome Master of the Universe diorama statues that have been around for a while now.

As for this newest offering, what’s not to like? Palmer is something of a hit on Arrow, spawning his own show with the DCTVU expansion Legends of Tomorrow, which’ll be airing some time this Fall. I think this is the first real-world representation of his alter ego of The Atom too, which makes this paperweight even cooler.

And although IH has this piece listed in the ‘paper-holding’ category, it’s hard to argue that the little guy wouldn’t look right at home standing next to your graphic novels or Arrow Blu-Rays on the bookshelf too.

Jason's been knee deep in videogames since he was but a lad. Cutting his teeth on the pixely glory that was the Atari 2600, he's been hack'n'slashing and shoot'em'uping ever since. Mainly an FPS and action guy, Jason enjoys the occasional well crafted title from every genre.
@jason_tas
Previous Nintendo NX to use an Android operating system? Update: Nope
Next Konami will continue to produce console games, but up its mobile offerings