Four heroes (of varying degrees) make up the second wave of Arkham Knight figures, due out this Fall. 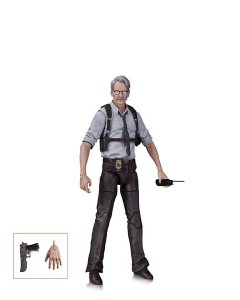 Arkham Knight might not be out yet for gaming consoles and the PC, but the first wave of the figures have been available for a little while now and are all kinds of impressive. And thankfully, it won’t be one and done for the line, as DC Collectibles has wave 2 ready to go for this November.

Including Nightwing, Catwoman, Robin, and Commissioner Jim Gordon, this series is all about the good guys and looks just as great as the first. Personally, I like all of them, but that Gordon in particular is terrific since he’s just a solid version of the character. We don’t see Jim Gordon figures made available too often, so it’s just great to get one. He’s such a massive part of the Batman lore and DC Universe when you’re talking about Gotham City, and it’s about time that he joins the Arkham line.

Each figure will presumably feature the same great articulation as the first wave, and each one stand in at 6.75″, with the exception of Catwoman, who’s 6.5″ tall, and all of them will include the accessories and interchangeable hands that you see in the shots below. Make some space on that shelf, wave 2 of the Batman: Arkham Knight line hits in November and will cost you $24.99 USD each.

Jason's been knee deep in videogames since he was but a lad. Cutting his teeth on the pixely glory that was the Atari 2600, he's been hack'n'slashing and shoot'em'uping ever since. Mainly an FPS and action guy, Jason enjoys the occasional well crafted title from every genre.
@jason_tas
Previous New Colder series announced for this Fall
Next Need for Speed will require an always-on internet connection