One of Valiant Comics’ biggest heroes returns, but in a whole new way.

Warning: There are a few minor spoilers in here for not only Bloodshot Reborn, but The Valiant as well. You’ve been warned!! 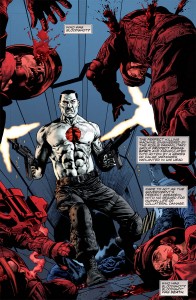 The events of The Valiant #4 were shocking ones for Bloodshot fans, and that might be putting it mildly. Even so though, readers had to know that it was only a matter of time till the unkillable hero made some kind of return to the Valiant U. And that time is here with the debut of Bloodshot Reborn #1.

This isn’t the character that you knew and loved though, as this version of Bloodshot is decidedly less powerful… so far anyway. I’ll get to what I mean by that in a second, but first some basics about the man known as Ray Garrison.

Garrison is the name that ‘Shot is going by now that he’s human again, and if you didn’t read that last issue of The Valiant, then you’re probably wondering what I’m talking about, so make sure you go catch up. Once again mortal, Ray has started crafting a pretty humdrum life for himself. He’s a handyman at a sleepy little motel in Colorado. Nothing special.

By night… well, by night he’s a drug and alcohol-fueled pit of self-pity and remorse for what he’s done as Bloodshot. The machine-man that he was killed a lot of people remember, and most of those were while he was under the control of Project Rising Spirit. He offed possible thousands of people that that group and the government that contracted them had deemed enemies, and he did so without remorse or care. Now that he’s ‘just a man’ all he can do is think about them. Every spare moment that he has, when he’s not working, he remembers- and that’s something that he doesn’t want to do, hence his new vices.

It’s more than a little shocking to see Ray resort to drugs and booze after seeing him at his peek as Bloodshot. Writer Jeff Lemire really brings home the nightmare that Ray’s life is, was, and has become with scenes like this though, and although it’s a shock, it adds a ton to the understanding of his current emotional state. 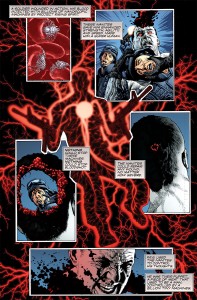 And when the big moment in the book comes, you’re kind of left to wonder if he’s lost his mind along with his nanites, or if something’s happening once again inside of him and manifesting itself in the real world. While I’ll let that simmer and won’t be spoiling that big moment, I can say that it looks like there are other Bloodshots out there in the world now, and they’re not military assassins- they’re mass-murderers. How Ray could hope to stop them in his current state is a mystery, and one that we’ll presumably explore a lot more of in the next issue.

Bringing all this to life by the way, is the talented art of Mico Suayan. Suayan has worked on Harbinger for Valiant in the past and presents a really cool, extremely detailed visual style that’s a perfect fit for something like Bloodshot. It’s a gritty look that works beautifully for a book as grim and personal-feeling as this one is. He also variates wildly between that style, which makes up the majority of the book, and… something else.

That ‘something else’ is something better left unsaid here, as it’s sure to figure into the Bloodshot Reborn comic for a good long time to come, and it seems to be a major plot device. So I won’t be spoiling is what I’m saying, but it’s radically different-looking than anything in the rest of the book, and it comes off really, really cool. Also great and worth a mention is the coloring work.

As usual in a Valiant book, the coloring is outstanding. Nothing comes off as flat, and everything in Bloodshot’s world has a great depth to it, which is due in part to the art and part to the coloring. I particularly liked the glow of the TV screens, which play a major part in the story, delivering some of the most important points.

I had a feeling that Bloodshot Reborn would be a great comic and I’m happy to say that it definitely is. There isn’t a ton of (new) action in this book, but there is a fantastic beginning for a whole new run with the character, that looks like it should evolve in some interesting ways in time.

I don’t know how long the killing machine can be contained, or if he’s really ‘gone’ with that wave of the Geomancer’s hands, but things are set up to get very interesting indeed while he’s gone.

Jason's been knee deep in videogames since he was but a lad. Cutting his teeth on the pixely glory that was the Atari 2600, he's been hack'n'slashing and shoot'em'uping ever since. Mainly an FPS and action guy, Jason enjoys the occasional well crafted title from every genre.
@jason_tas
Previous Adi Granov covers for Empire Strikes Back and Return of the Jedi OGNs revealed
Next Reused Assets #7: Chap Stone And The Stale Bread