Dynasty Warriors 8 Empires is another iteration of the popular hack and slash title and is a lot of fun to play. 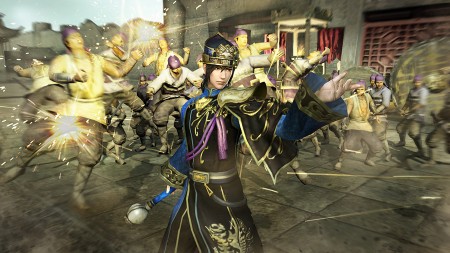 Dynasty Warriors takes place during the Three Kingdoms era in ancient China, where the different empires are in an all-out war as each kingdom is trying to unify the ancient country. Players can choose to rule over a kingdom or sit back and work as an officer. The amount of choices can actually seem overwhelming at first, but a good tutorial helps gamers learn quickly, and it all starts by learning how to manage the actual kingdom.

After picking a kingdom to protect, players will be introduced to the War Council. During War Council, players will pick their bi-yearly goals, such as invade one enemy and win, or recruit an officer.

Completing these tasks will provide merit points for characters, which can be used to upgrade an officer’s stats. Players can choose to rule with an iron fist or try and negotiate treaties with other kingdoms. These choices and more are all answered to during the Strategy Phase.

The Strategy Phase is extensive, and a lot of time will be spent navigating these menus. Players will choose one action to perform during a given month in this phase, and this is the only action that will take place during this time. So for example, in the month of June, I decided to go to battle with a neighboring kingdom. After battle, the next month starts and I got to choose a new option, such as building an item shop.

Players can build new structures in occupied countries as well, not just on their home turf. By building these structures, the player can buy upgrades for weapons, items, and even new mounts. Players can even throw a giant banquet for their officers, which helps increase friendship levels, it gets that deep. Becoming better friends with officers provides new Stratagems as well, so there is a reason to do stuff like this aside from being pals.

Every choice a player makes will have some kind repercussion actually. To rule a happy kingdom does reap its own rewards, but doing so will be costly. On the other side of things, to rule with an iron fist is cheap, but is lack of loyalty worth the lack of expense? Ruling a kingdom is all about making tough decisions and that’s not something that Dynasty Warriors 8 Empires skimps on. One of those decisions, maybe the biggest, is whether or not to go to war.

All of the exciting action takes place on the battlefields in DW8E. Players will wage full-on war at some point in play, and this is truly when the fun starts. During battle, the game turns into a third-person hack and slash adventure, where players are tasked with a winning the fight at hand. This is done by either by killing the general or capturing the main base.

Capturing bases is done by attacking the opposition troops and killing all of them. Each officer in the game has a different weapon too to make them a little less cookie-cutter; from a simple sword to a bunch of giant metal balls, the choices are numerous. Each character in the game has a set of “special power moves” as well, that will help turn the tide of war to their favor. These are called Stratagems and they cast certain effects to either provide a boost to the officer or hurt the opposing army.

The battles are fierce and exciting and easy to control since the combo system is simple, as there are only two attack buttons. The battlefields are gigantic though, and getting around on foot can take a long time. This is why each character has a mount, such as a horse or a bear (! -ed) that can be used to quickly travel across the battlefield.

Players will be able to purchase exotic mounts, such as that bear or even an elephant, from the item shops. These odd creatures added a bit of strange humor into the game, and running over an army of men with an elephant provides a lot of laughs.

The customization options in DW8E are enormous as well. Players can build a whole custom army, starting off by creating a custom banner to fly. After that, you’ll then move onto which types of horses to make use of. The last two parts consist of creating a uniform, and then finally the officers themselves.

Players will start off by selecting the features of the character, and there are a ton of choices here as well. Feel like creating an army of green-skinned soldiers? That is possible to do with DW8E. Players will then decide on starting the game as a free agent or being a part of an established army. As a free agent, a player is free to work with any kingdom they choose, so that’s a nice variation on the standard gameplay.

Players can work their way onto an army by performing quests, or they can play a more devious role and pit kingdom against kingdom, which is particularly cool. The choices are endless and the possibilities boundless. Replaying the game will result in a different experience each time.

Dynasty Warriors is a fun game, surprisingly so, and I’ve had a great experience playing this title.

It has been a while since I last played a Dynasty Warriors title though, so pretty much everything was fresh to me this time around. The last one I actually played was Dynasty Warriors 3, and that was on the original Playstation, where the battle experience was a lot different.

Because of the constraints of the PS1, the battlefield was nonexistent. Instead I believe battle was done in a rock, paper, and scissor mold (if I remember correctly). The differences between DW3 and DW8E are too many to list.

That being said, I would recommend this one to anyone interested in this style of game. There is a lot to accomplish and challenges can be difficult, but I really enjoyed managing my kingdom and then having the option to hack and slash my way through my enemies.

As a fearful proponent, I agree with out robot overlords on House Bill 10010101 - The Full Extermination of the Human Race. But until then, make sure to check out all my writings on video game stuff.
@@docbrown303
Previous Sony and EA Taking the Markets by Storm
Next Sega’s OutRun hits the 3DS, emphasis on the ‘3D’