Is Nintendo’s latest revision of the 3DS hardware worth your time? Well yeah, pretty much. 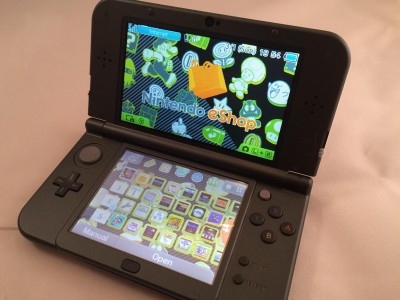 My experience with the 3DS’ 3D has been pitiful at best over the years. I loved the idea originally, and it was a big selling point on the system for me at the time, but in practice the 3D functions were something that never worked consistently for me. See, as I (and pretty much everyone else) play a handheld, I can’t sit perfectly still and tend to move around a bit. With the original 3DS, when you do that, you lose pretty much all 3D since your eyes view it from a different angle, and even get an unplayable screen display where you can barely tell what’s going on. As a result, I switched off the 3D and left it off permanently, skipping out on some neat effects that some of the top games on the console offer.

The New 3DS fixes this aggravating issue and a lot more, including the addition of a second analog stick, a pair of new shoulder buttons, and a way better processor. So needless to say at this point in the review, it’s a massive improvement over what’s come before and the definitive version of the console.

When you first crack open the box, you’ll notice (other than the fact that there’s no charger included) that there are a few big changes to the body of the 3DS with the New version. For starters, the cartridge slot has been moved from the back to the front left side. I actually like this a lot better as it just seems more intuitive. The power button has also been moved to the front of the console, as has the new chunkier stylus. On the hinge of the top screen, you’ll find the volume and 3D sliders, both in a great position and easy to use as you play. On the backside, you’ll find the old and new shoulder buttons as well as the IR port and connection for charging. 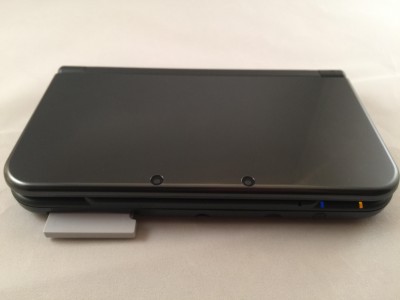 Open up the machine and you’ll see the now very familiar pair of screens as well as the usual D-Pad, face buttons, start and select buttons, and the circle slider. In the center of the machine, you’ll now see just one button (the home button) instead of three, and a new second analog ‘stick’ to the upper right, right above the face buttons. One interesting thing of note, is that this second stick feels like it doesn’t move at all when you push it around. It certainly does though, and actually is really sensitive, so it doesn’t need to slide around anywhere near as much as the circle pad.

At the top of the console, you’ll see another one of the biggest new additions, that being the face-tracking sensor. Located just to the right of the forward-facing camera (the back cameras are in the same spot), this tiny sensor actually follows your head movement as you play. Why? To constantly shift the 3D image so that you can actually view it. With the exception of extreme jumps (when you fall out of range), the camera works perfectly and actually -finally- offers the 3D that the 3DS was supposed to give gamers from the beginning. Not that the 3D looks any different mind you, but it actually works almost all the time, and that’s a big enough improvement for me. Yes, it would have been nice to have had it years ago, but it’s pretty awesome to see it in action now.

Also new to the handheld is the NFC compatibility. You can now freely use your Amiibo figures on the go, and with your portable copy of Super Smash Bros- not that the figures will be limited to SSB, as there are sure to be plenty of games on the way that incorporate them in some manner. To use this, you simply press your figure up against the second screen (the bottom one), which is pretty much the same as the way you use Wii U’s Amiibo functionality.

And there’s one other element here that you can’t see, that’s the CPU speed. The processor has been swapped out for a faster one that can open programs way with less loading time than ever before. This will also be reflected in games, which are expected to begin to be more and more New 3DS exclusive. Xenoblade Chronicles 3D will be the first of these (which obviously isn’t out yet, so I can’t comment on it), but it certainly won’t be the last. With the increased speed and more power of the New 3DS, I don’t doubt that we’ll be seeing plenty of developers taking advantage of it. And maybe with the added second analog stick, a few FPS’ might even pop up on the console… What? It could happen! 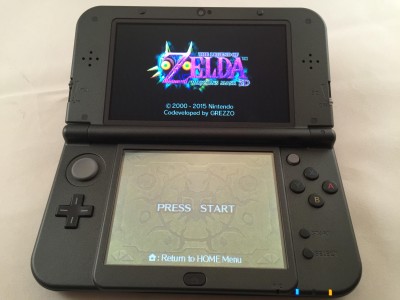 The New 3DS XL has a few big improvements over the previous model that make it the one to own if you’re a gamer on the go.

Sure you’ve got a lot of options these days for mobile gaming, but as a gaming console, the New 3DS holds every element that you could want in one. It’s pretty simple, if you want the best 3DS available, this is the one to buy. And if you already have a 3DS and are wondering whether to upgrade or not, the answer basically boils down to one thing- new games.

I imagine that there’ll still be plenty of titles made available that’ll play on any 3DS, but some of the biggest and best ones are sure to be exclusives to this New console. If you want to continue to play those, then the answer to if you should pick up the New 3DS, is easily ‘yes’.

Jason's been knee deep in videogames since he was but a lad. Cutting his teeth on the pixely glory that was the Atari 2600, he's been hack'n'slashing and shoot'em'uping ever since. Mainly an FPS and action guy, Jason enjoys the occasional well crafted title from every genre.
@jason_tas
Previous Five New Games Added to PlayStation Now Library
Next Comic Shop Picks: Princess Leia and Hawkeye get new #1’s and Green Lantern goes bad?