The story of a girl and her white fox. 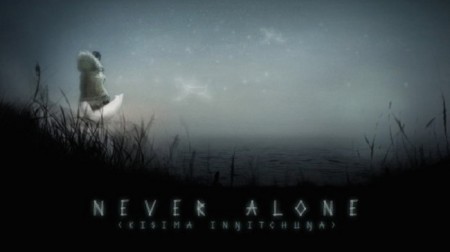 One of the great things about going to gaming expos is that you will often find that a game you weren’t aware of before is one of the ones that leaves the most lasting impressions.  We got that exact feeling when we played Never Alone, or ‘Kisima Innitchuna’ as it’s also known.  It’s certainly shaping up to be one of the titles to look out for in the future.

Developed by Upper One Games, Never Alone is billed as the first of a genre called “World Games”, a series of games that, to quote the game’s website, “draw fully upon the voices and richness of world cultures to create complex and fascinating game worlds for a global audience”.

Never Alone takes the form of a 1 or 2 player puzzle platformer, where you control a girl (who is simply called ‘Girl’) and her fox, as you try to traverse the Arctic lands.  The story ing the game is inspired by Kunuuksaayuka, the story of an endless blizzard, and Girl and Fox ahve to work together to get through and survive.  Both Girl and Fox have different abilities that you will need to ultize in order to advance.  For example, Fox has the ability to scamper up small cliff faces and squeeze through narrow gaps, whereas Girl is able to climb ropes and push and pull things.  We played the game in 2 player co-op, and the two characters compliment each other very well, and the game flows nicely along when you gel together as a team.  You can also play it alone, switching between characters as and when you need to.  Although exactly how that works and what it means for the flow of the game, we don’t know.  But it certainly seems as though it’s in the co-op play that this game really shines. 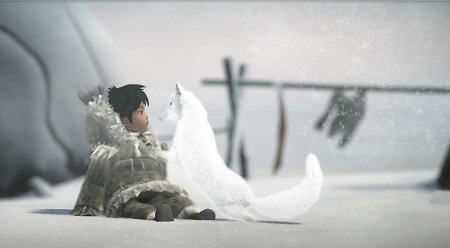 The controls are pretty tight for the most part, and it does feel like, when you go wrong, it’s your fault, not the game’s.  Although there are moments when the jumps aren’t so tight, and you find yourself skittering off the edge of a platform, or only just managing to stay on.  Patience is a virtue in this game.  There are often spirits flying around, and they will snatch you up if you go near their arms.  They always move in a pattern, though, so you just need to watch and wait for your moment to move.

The game’s artic give it a striking and simultaneously bleak and mystical look.  Like games like Limbo and Unfinished Swan, the unique visual style draws you in, but it’s the gameplay and story that will keep you hooked.  Never Alone has certainly proven to be one of the hidden gems of EGX, and is one you should be definitely keeping an eye on.

Never Alone is scheduled for release on November 18th for PC, PS4 and Xbox One.

Mike is Brutal Gamer's Indie Editor. He has been playing video games since the early 90s and is fond of racing games, puzzlers and MMOs. Typing /played while in WoW makes him cry, but not enough to stop him playing some more.
@Ognawk
Previous EGX Hands-On: Minutes
Next Reused Assets #2: The One From EGX London