Professor X was hiding something; a mutant so powerful it could undo all the work he and his X-Men have ever done to try and help mutant/human relations. And now it’s loose. 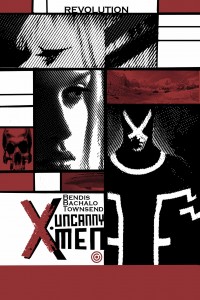 This September, the secrets of the greatest champion for mutant/human relations come to light in the oversized UNCANNY X-MEN #25 – the shocking finale of The Last Will & Testament of Charles Xavier! Superstar creators Brian Michael Bendis & Chris Bachalo unearth a devastating secret of their former mentor that will send shockwaves through both camps of X-Men! What has Xavier been hiding? A mutant so powerful their very existence was a threat to mutant’s way of life. A destructive force so powerful they would’ve wiped out any chance of a peaceful coexistence between humans and mutants. An unstoppable power now unleashed in the wake of Xavier’s death! Against such overwhelming power, the splintered squads of X-Men must unite if they have any hope of stopping it. And the story of how it came to be will cast a new light on their beloved teacher – and the depths he would go to protect mutant/human relations. Witness Xavier’s final “gift” to his children, but will it be their undoing? Find out when The Last Will & Testament of Charles Xavier comes to its staggering conclusion in UNCANNY X-MEN #25!

The final piece of the puzzle in the X-Men’s corner of the Original Sin fallout, Uncanny #25 should be a ripper in just about every way. The X-Men of course, have had no shortage of secrets over the years, several of which have come back to bite them in the posteriors, but this one just might be the biggest with the most potential for havoc.

And it’s not limited to the X-Men either as Marvel is saying this ‘secret’ has Marvel U-spanning possibilities, which would be pretty big time. As to what ‘it’ is, well, even if you’ve been reading right along with this latest sage, you might have no clue. All will be revealed though, when Uncanny X-Men #25 hits stands on September 3rd from Brian Michael Bendis and Chris Bachalo.
Share

Jason's been knee deep in videogames since he was but a lad. Cutting his teeth on the pixely glory that was the Atari 2600, he's been hack'n'slashing and shoot'em'uping ever since. Mainly an FPS and action guy, Jason enjoys the occasional well crafted title from every genre.
@jason_tas
Previous D-Link Wireless AC1900 (Hardware) Review
Next PES 2015 demo dated, new details announced