Former Creative Director, Patrice Désilets has been quoted by Polygon saying “With all the time, money and people on that project, you [Ubisoft] could’ve done it.” 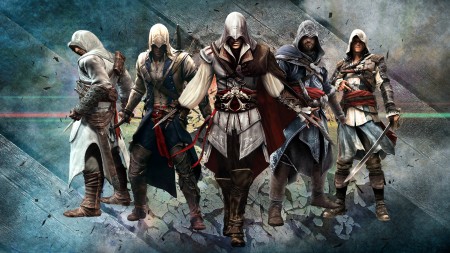 Alot of fans, and not just us women are disappointed that we won’t be playing as a female again in this game. Ubisoft has said that they just don’t have to time to pull it off.

Ubisoft current creative director Alex Amancio explained the lack of female representation in the game’s leads.
What it all boils down to is: including female assassins would have meant additional work, and consequently would have also been more expensive. And so the original plan to include them in the game was eventually dropped.
“It’s double the animations, it’s double the voices, all that stuff and double the visual assets,” Amancio explained. “Especially because we have customizable assassins. It was really a lot of extra production work.”
According to level designer Bruno St. Andre, this extra work would have entailed 8,000 additional animations, which would have also necessitated the rigging of a different skeleton for the female assassins’ more feminine shape and movements.

Still waiting on news of the present day game play , I’m guessing this means that the present day protag will also be a man, or possibly first person again. Keep checking Brutal Gamer for more news as it breaks.
Share

One of BG's UK contributors and a PlayStation super-fan, Kiri is self-described as "super competitive" and can be most often found shouting at her other half "kicking my butt on Injustice".
Previous Square Enix reveals Batman Arkham Origins Exclusive For SDCC
Next R-Type Dimensions (PS3) Review