Zen Studios brings the genre-mashing Castlestorm to the Wii U. So how is storming castles on the GamePad?

At what point does a game stop being “Indie” and progress into the much more prevalent ‘general gaming’ area? Something like Minecraft (which has been bought over 33 million times) is it still considered an indie title. At least, that’s the way it’s been advertised all this time, and every chance Mojang seems to get they promote Minecraft as an “Indie” title.

And does a game have to be available on only one console to be ‘indie’ or can it be multiplatform, even though the PC seems to continue to just keep on being the largest platform for those kinds of titles. As more and more people are beginning to consider this once niche genre as something more than stagnant AAA creations, will we see the industry flip, as we saw with the film industry? 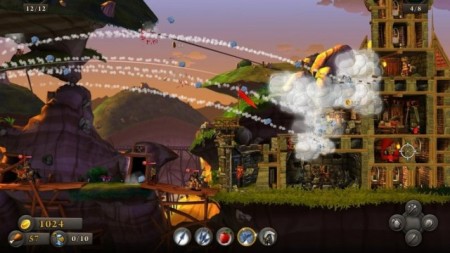 The title I got the chance to review this past week got me thinking about the indie scene; that title being Castlestorm. I had the chance of playing it on PC when it first came out a few months ago and was pleased by its take on the Angry Birds formula. The game then recently came out on Wii U (and all other ‘last-gen’ consoles) and as such was to be reviewed. The title is by Zen studios which is most known for its Zen Pinball titles which have brought many pinball enthusiasts joy.

Unlike the pinball games though, Castlestorm is something very peculiar to classify, but it can most be likened to the Angry Bird titles. That being because the gameplay includes throwing projectiles at enemy castles to knock them down. But it also integrates some strategy by sending out units on the ground which is definitely something you won’t find nesting in that other game.

This makes the choice of the game appear, deciding whether you use your projectiles to shoot the enemy castle or to kill the knights coming to destroy you. You also can spawn your own men to fight for you and on top of that, can spawn your own character on the ground to kill the pawns. This means you can’t shoot your turret, but you are much more powerful than the enemy troops making it a helpful move during a match.

Of course being on the Wii U, the controller must be brought into consideration. The game utilizes the left thumbstick as the aim when using the turret and the right to control your camera on the map. The problem with this set up is that that the thumbstick is not very precise when trying to aim headshots on enemies. You can also use the D-pad for a bit more precise control but this is slow and annoying when trying to kill many enemies.

The game is also mirrored on the controllers screen which is great for off-screen play but adds little to the experience. The is well done though and does have co-op one player on the gamepad and the other on the TV which is nice as not many people play online. 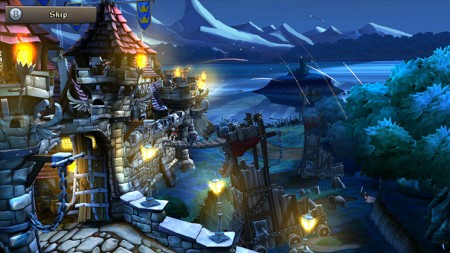 The graphic style of Castlestorm would probably be best considered cartoony which suits this game just fine and it contains many cut scenes consisting of no voices and greatly exaggerated characters. The story is very childish and reminiscent of something found in LEGO titles which is fitting as the building-block toy line was a major influence in the design of the game. The game seems to have limited sound work in general though, consisting of the same looped song and the same dying noises played over and over again… but at least it can be muted if it gets to be too much.

Obviously this is not designed to compete too much with something like Mario or Zelda, but it is a small amount of fun if nothing else. It would mostly be recommended to those with children as most adults will probably not find this too interesting for too long a period of time.

But then again, for only 10 dollars on the eShop, it could be what you need to keep your Wii U at least relevant among your other consoles.

A young lad on a magical journey through the dark and terrifying world known to many as "the industry". From his hellish prison, Isaac can hear the cries of pain and suffering from those who came before him, only to hear their hearts stop in utter terror. Video games aren't all fun and games kiddies.
Previous Unity #3 (Comics) Preview
Next K’Nex Titanfall sets on the way