Unity takes down Aric and Livewire commands the X-O Manowar armor. Things don’t look too great for the Visigoth leader in the latest issue of Valiant Comics’ Unity. 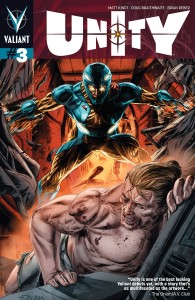 Valiant is proud to present an advance look at Unity #3 by the best-selling creative team of Matt Kindt and Doug Braithwaite! Enter: Livewire! The next blockbuster chapter of Valiant’s chart-topping, fan favorite new series slams into overdrive as Valiant’s machine-wielding heroine takes command of the X-O Manowar armor!

On an airtight team of stone-cold soldiers, Amanda McKee is the one variable in the equation that equals absolute kill. Now, as the last woman standing against the unstoppable force known as X-O Manowar, the Harbinger Foundation’s most seasoned technopath has just added one new item to her resume – newest bearer of the X-O Manowar armor and the finger behind the trigger of the universe’s most powerful weapon. Watch out world…this means trouble.

Find out why Unity is the new debut series debut that IGN calls “crazy, beautiful and filled to the brim with action” on January 15th, only in Unity #3 – featuring covers by superstar artists J.G. Jones, Shane Davis, and Doug Braithwaite!

Not that I can imagine that Livewire will be holding onto that armor for all that long (remember that although it is a piece of tech, it’s a living piece of tech that’s actually bonded to Aric), but it’s pretty cool how her specific power set has been used in this series. It’s neat to see how the X-O suit interacts with others too. It’s also pretty neat to see Harada’s evil side start to really come through as he tries to snuff out Aric and his people in the preview pages below.

It should be interesting to see how the rest of the team responds to that and just how the Harbinger headman will be handled down the road. Valiant has been dropping little hints here and there through previews of other books that he’s not exactly going to be compatible with Unity in the near future; this might just be the start of that segue.

Either way, Unity continues to be a stunner both in scope and narrative as well as in the art department. Catch Issue #3 when it arrives at your local comic shop this week (1/15) from the talented Matt Kindt and penciler Doug Braithwaite.

Jason's been knee deep in videogames since he was but a lad. Cutting his teeth on the pixely glory that was the Atari 2600, he's been hack'n'slashing and shoot'em'uping ever since. Mainly an FPS and action guy, Jason enjoys the occasional well crafted title from every genre.
@jason_tas
Previous New Rambo Trailer looks sharp as a machete
Next Castlestorm (Wii U) Review