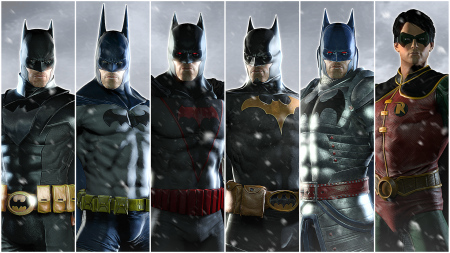 Warner Brothers has been doing a great job getting out the skins for this game- as a big Batman fan myself, I love that they’ve been dropping in all kinds of uniforms for the Dark Knight that pay homage to some of his greatest and biggest adventures. We’ve already got some good ones (Noel and the New 52 suit come to mind), but now Batman: Arkham Origins players can don the costume from The Long Halloween among others (though that one pretty much does it for me).

Here’s your full list of what’s available now as a part of the new ‘Infinite Earths’ skin pack:

As far as other dlc goes, there’s plenty of that out now too with the Black Mask Challenge Pack and the Online Supply Drop #1.

Available on the PlayStation Network, the Xbox LIVE online entertainment network from Microsoft, Nintendo eShop and Steam for $1.99, the Black Mask Challenge pack allows players to take on Gotham’s most dangerous crime lord in two all new challenge maps: Lot Full and Hidden Facility. All players can defend the city as Batman, and those who own the Deathstroke Challenge Pack can also choose to play as Deathstroke in this new challenge map pack.

That’s actually a really nice little touch that you can play as Deathstroke in the new Challenge Pack if you already have the ‘Stroke’s own pack. Cool stuff. Outside of this drop, the next dlc has also been announced by Warners as a single-player, campaign episode. We don’t have a date yet on it, but the pack will follow an even younger (and Bat-suitless) Bruce Wayne as he goes through a Batman Begins-like challenge against a horde of ninjas.

We’ll have a date for you on that one as soon as we find something out, in the meantime, all of the new dlc written about here is available now to add onto your copy of Batman: Arkham Origins for the Xbox 360, PS3 and PC.

Jason's been knee deep in videogames since he was but a lad. Cutting his teeth on the pixely glory that was the Atari 2600, he's been hack'n'slashing and shoot'em'uping ever since. Mainly an FPS and action guy, Jason enjoys the occasional well crafted title from every genre.
@jason_tas
Previous Sega 3D Classics start blasting onto the 3DS
Next Persona 4 Arena: Official Design Works in stores now