It’s a supernatural kind of week for the toy and collectible maker as a trio of big properties get some new goodies in stores. 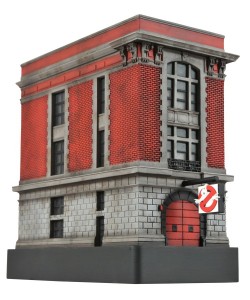 Probably the most timely of the new releases is the figure of Thor from the Thor: The Dark World film that releases this Friday. A part of the Marvel Select line of toys, Thor (and eventually, Jane) is the first character from the movie to see immortalization in plastic and he’s looking mighty sharp in his new gold and blue ensemble.

Following up on the big guy is a bust of Rick Grimes from The Walking Dead. This version of Rick is from the comics, as you’ll note by the missing right hand, but is all the same a cool collectible for any kind of Dead fan- just maybe not the Grateful kind…

And then there’s the Ghostbusters firehouse. And it lights up. If I have to explain why this one is cool then I’ve lost all faith in you. If you’re a fan, it’s pretty much a ‘must buy’.

Jason's been knee deep in videogames since he was but a lad. Cutting his teeth on the pixely glory that was the Atari 2600, he's been hack'n'slashing and shoot'em'uping ever since. Mainly an FPS and action guy, Jason enjoys the occasional well crafted title from every genre.
@jason_tas
Previous What is the Metal Gear Experience?
Next GOG.com partners with charitable foundations