“The force is strong with this one.” 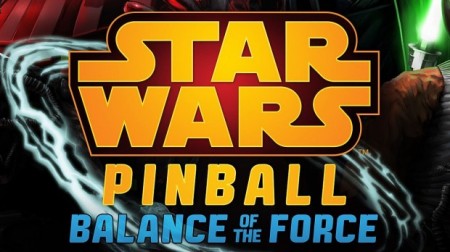 Zen Studios takes players to the Dark (or Light) Side with their latest pinball release, Star Wars Pinball on the 3Ds eShop. With all the characters you know and love, coupled with great lines plucked straight from the films, this is a Star Wars release you don’t want to miss. As a system, the Nintendo 3Ds is downright ideal for playing a pinball game. I can’t say that I enjoy the 3D aspect in most games, but with pinball it is a definite plus.

The tables come alive, as balls and flippers pop from the screen, and a glowing light saber flashes across the table to deposit your ball. It truly adds something special to the experience, and brings pinball tables to life in a vivid way that serves well to highlight the many intricate details that have gone into each of the three tables included in the game. 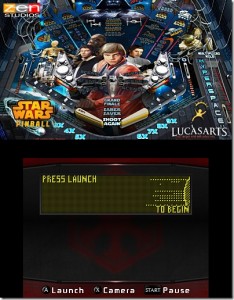 And what tables they are! As you begin the game, you are given the choice of which table to play (no locked tables or features here). You can play each table in both standard mode (where you play on your own in search of the ever elusive high score), or hotseat mode (play with friends, passing the device back and forth each time a ball is lost). Standard play is just what it sounds, where you play a standard game of pinball, three balls per game. While the leaderboards option doesn’t work as well as it might, the element of competing against yourself means you’ll never want for an opponent.

Beyond the element of competition, these tables are fun to play just because they are so well done. Although the small screen on a 3Ds does make all the tiny details that much harder to see, it didn’t really detract from the game for me. As in other Zen Studios pinball games, you are given a panoramic view of the table, and a soaring tour of all its elements, when you launch the table.

As you begin play, the screen is centered on the table, but you have camera options available to you if you want to change that up a bit. For me, the authentic quotes from the Star Wars universe that are called out as you play really served to immerse you in the table. The three tables encompass a range of Star Wars characters.

The three tables included with the game are The Empire Strikes Back, Clone Wars, and Boba Fett. In a cool twist, as you begin play, you are given the option to choose to support the Rebel Alliance or the Galactic Empire. A point system keeps track of your scores, showing you how you are affecting the Balance of the Force. Whether you choose to use your powers for good or evil is up to you, but either way it ups the ante on each and every game. 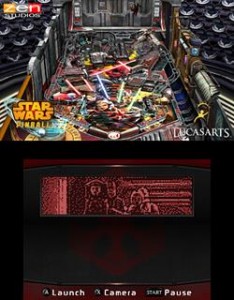 Star Wars Pinball pays homage to the universally loved world of Star Wars, in pinball form. With authentic artwork and audio, every game immerses you in the Star Wars universe, while the 3D effects provided by the 3Ds system add realism and depth to the tables. While working the leaderboards isn’t as easy as it is on a console, the elements of balancing the force and competing with yourself add plenty of competition to the game.